"My dad's the brawn and I'm all brains! Together, we bring the pain."
—Willy Warbles, Phase 2 Death Screen

Willy Warbles is a minor boss in Cuphead. He is Wally Warbles' son and the 2nd phase of Aviary Action!

Willy Warbles is a juvenile bird with yellow eyes, larger brain, a goofy-looking toothy smile, and feathers colored in red and blue like his father. He rides on the floating nest sporting leafs.

Willy Warbles is the brains of his family, according to his death screen line. To defend his smart behavior, he is shown to carry around a ray gun that he most likely invented, despite his young age. He also seems to depend on his father when he is in a sticky situation, proven when he starts crying for his father to deal with Cuphead and Mugman at the end of his phase. As suggested by his giggling whilst brandishing his ray gun, he seems to be mischievous by nature.

In this 2nd phase after beating Wally Warbles in his 1st phase battle, Willy Warbles will be revealed after the cuckoo clock explodes. He will float around the screen. In Simple mode, he moves slightly slower. In Expert mode, he moves faster. He is accompanied by five spiked eggs that block bullets and revolve around him. The eggs periodically expand and contract around the boss, damaging the player(s) if they touch them. In Simple mode, there will only be four eggs and they move slower. In Expert mode, there will be six eggs and they increase their speed when expanding, and reduce it when contracting.

Apart from the egg shields, he can fire a single electric bullet at the player's direct location, which can always be parried.

Once he has taken enough damage, Wally's son will cry out for help and disappear, after which the original Wally appears for a final fight. If in Simple mode, his cry for help won't be enough, as the battle just ends.

Willy Warbles is a homage to the cuddlier version of Woody the Woodpecker with Wally, as well as a nod to the more classic, teeth-out, zany version of the character. His methods of firing a laser gun and having spiked egg shields are references from Earthworm Jim and Yoshi's Island respectively.[1] 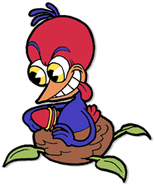 Willy Warbles pulling out his raygun. 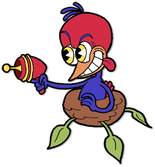 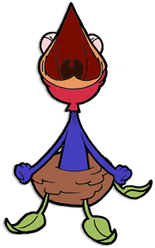 Willy Warbles's defeat.
Add a photo to this gallery

Retrieved from "https://cuphead.fandom.com/wiki/Willy_Warbles?oldid=56786"
Community content is available under CC-BY-SA unless otherwise noted.