watch 01:09
Who is Wally Warbles?
Do you like this video?
Play Sound

Wally Warbles is a bird boss that can be found in Inkwell Isle Two. He appears in the level Aviary Action!, which is an airplane level.

Wally is a red-headed, blue-feathered bird of unknown species who wears a cuckoo clock that hides most of his body save for his legs, wings, and head. His legs are disguised as a pendulum before the battle with him begins. He has red and blue feathers and an orange beak and feet. Inside the clock resides his son.

Judging by how aggressive he appears and his son's death screen line, Wally acts as the brawn of the Warbles family. He appears to be a protective father to his son, having a cuckoo clock for him to be kept safe in while Wally deals with his own enemies. Wally is even determined enough to fight until the end, no matter what happens to him in the process, as evident by the fact that he continues the battle featherless and on a stretcher. He also seems to have a boastful side, as suggested by the death screens from phases 1 and 3.

At the beginning of the battle, Wally acts like a cuckoo clock, then he bursts his head out of the clock's face and the cuckoo disappears. He then screeches loudly at Cuphead and Mugman.

"I own the air -- I fly where eagles dare!"
—Wally Warbles, Phase 1 Death Screen

Hitpoints (before whistling) = 1000/600/700
At the beginning of the fight, Wally Warbles will use two different attacks:

After taking enough damage, Wally will turn his head into a factory steam whistle and sound it in rage. He will only use one attack in this sub-phase:

Throughout the first phase, he is accompanied by rows of four birds, each with a nail tied to them. The first three will be yellow, while the last one is always pink and able to be parried, it also fly across more steadily than the yellow counterpart. They will fly at two specific heights, which are near the top or near the bottom. In Simple mode, there will just be three at each row and they stop appearing after Wally steams in rage. In Expert mode, they appear as soon as the battle begins rather than after a short time and they will fly faster across the screen at the same height as the player(s) when they spawn. Hitpoints = 8/8/8

After Wally has taken enough damage, he will lose all of his feathers and fall out of his birdhouse, after which it explodes, revealing his son, Willy Warbles, flying on a small birds nest.

"My dad's the brawn and I'm all brains! Together, we bring the pain."
—Willy Warbles, Phase 3 Death Screen

In the next phase, Willy floats around the screen. In Simple mode, he moves slightly slower. In Expert mode, he moves faster. He is accompanied by five spiky eggs that block bullets and revolve around him. The eggs periodically expand and contract around him, damaging the player(s) if they made contact. In Simple mode, there will only be four eggs and they move slower. In Expert mode, there will be six eggs and they revolve around quicker when expanding, and slower it when contracting.

Apart from the eggs, he can fire a single electric bullet at the player's direct location, which can always be parried.

Once he has taken enough damage, Willy will cry out for help and disappear, after which Wally appears for a final fight. If in Simple mode, his cry for help won't be enough, as the battle just ends.

"Even without my feathers, you're in for stormy weather!"
—Wally Warbles, Final Phase Death Screen

In this final phase, Wally is seen lying on a stretcher, wounded and naked from the last fight and being carried by two blue birds in paramedic uniforms. In Expert mode, the stretcher moves back and forth faster. He has two primary attacks to damage the player(s):

The two blue birds periodically shoot pills up from their beak during Wally's attacks. After a short pause, the pill splits apart with one end targeting the player's location. Occasionally, the pill will be pink, signaling its ability to be parried. In Expert mode, the paramedic birds attack more often.

The only vulnerable segment of the boss is Wally himself as the paramedics blocks the bullets from the side. When he shoots his heart out, the heart will be the only part that can be damaged, not even his body counts. Bombs are nearly required for this stage to damage him from above, however, the player can damage Wally from the bottom of the stretcher, as long as the stretcher is not on the left side of the stage.

Once Wally has taken enough damage, he is defeated and left dizzy. The two blue birds, without hesitation, prepare to make a meal out of his corpse by wildly sprinkling him with salt and pepper, with their medic hats being replaced by chef hats. 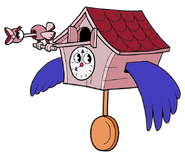 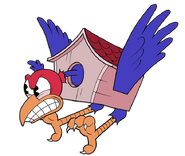 Wally preparing his next move 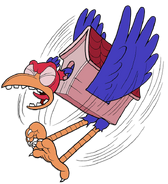 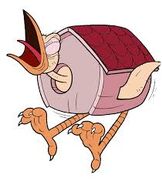 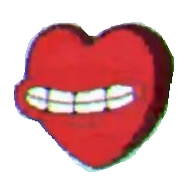 Wally without his heart.

Pencil test of The nail birds.

A turret bird minion is in the code for this fight but got cut for unknown reasons, most likely due to being way too similar to Hilda Berg's Zeppeling. Based on the code, it would have probably moved up and down the side of the screen, like Warble's early phases. At the start of the fight two will come out immediately and they will aim and shoot at wherever the player(s) is. Hitpoints = 8

The unused projectile was the original bullet Wally uses in phase 1 for his finger gun attack.

Animator Jake Clark took Wally's bird-in-house through a number of conceptual possibilities and the team used characters like the giant roc in Popeye the Sailor Meets Sinbad the Sailor and Woody Woodpecker to refine Wally's expressions and form. Wally got his name by finding the best W.W. name the team could master as a homage to the aforementioned Woody Woodpecker.[2]

Retrieved from "https://cuphead.fandom.com/wiki/Wally_Warbles?oldid=62847"
Community content is available under CC-BY-SA unless otherwise noted.