Start a Wiki
watch 01:10
What is the Tipsy Troop?
Do you like this video?

Tipsy Troop is a group of three drunk alcohol beverages that appear on the boss fight with King Dice when landing on Space 1. They are: Rumulus, Ol' Ethan, and Ginette.

The Tipsy Troop don't do anything special in their intro, just appearing with their idle animation, although what appears to be a pouring noise is briefly heard right before the announcer speaks. However, once the fight actually begins, the empty tables in the background will then be filled with customers, which will disappear and appear over time.

The Tipsy Troop is a trio of three different glasses. Ol' Ethan is a rum glass with a red-nose, a brown mustache and large eyebrows. Ginette is a martini glass with purple eyelashes and eye shadow, with red lipstick. Rumulus is a whiskey bottle with a large nose, red eyes and has a gap between two of his teeth. All three members have bags under their eyes, possibly as a way to show that they're drunk.

Ginette is surly, Rumulus is short-tempered, and Ol' Ethan is a bumbler.[1] They seem prone to hiccups, as evidenced by their death screen, and that they wobble drunkenly, which is a visual pun on the effects of drinking excessive amounts of alcohol.

All three have their own singular attack and they simultaneously attack the player relentlessly. They are considered separate enemies and must be defeated one by one. The alcohol beverages are: 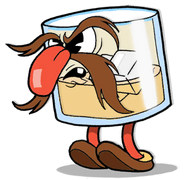 Retrieved from "https://cuphead.fandom.com/wiki/Tipsy_Troop?oldid=56658"
Community content is available under CC-BY-SA unless otherwise noted.