Cuphead Wiki
Register
Don't have an account?
Sign In
Advertisement
in: Characters, Bosses, The Delicious Last Course,
and 2 more

The Howling Aces are one of the new bosses in the Cuphead: The Delicious Last Course DLC. They are fought during Doggone Dogfight. They are the keepers of the Pineapple Mint.

The Fighter Pilot Bulldog wears a sleeveless top, brown open finger gloves, trousers and a red beret, and his arms have two bone tattoos on his left arm that creates a cross. He has a bandage on his chin.

The Yankee Yippers are small and have cartoonish dog ears. They wear yellow piloting gear and jetpacks.

The Chinook Pilot Saluki, who serves as the leader of the team, wears a yellow pilot's suit with a red collar, a red chest pocket on the right, with a red armband and belt. She also wears brown open finger gloves and boots, and a red garrison cap. She has long ears resembling twintails and a long snout. A patch of forelock stick out from her hat.

The Dog Chinook is based on a dachshund as it has a long "body", with a few holes on its back that allows artillery to be fired, and has four wheels around each paw. It has a red bow on top of its front propeller; on its back, there is another propeller, a red ring and bone cross. It also has a extremely long tongue, hollow eyes, pink nose and teeth that can be sharp at any time with two big extendable paws.

Pilot Saluki and her tail salute as she stands on the tongue of the giant Dog Chinook, and then being carried away by the Chinook as its tongue retracts. The Chinook itself flies off to the right. In the background, Pilot Bulldog flies closer from behind in a fighter, flying over the player(s) Pilot Bulldog comes back down above the screen and the fight begins.

"You thought you were top dog, but you never had a sniff."
—Fighter Pilot Bulldog, Death Screen

Canteen Hughes flies the plane that the player stands on, and can move left and right by standing on the respective wings. Canteen will clap his hands every time the player clear a phase of the fight and is shocked when they take a hit. He also seems to have some beef with the aces. Only Pilot Bulldog himself can be hit, and not his plane, requiring precise control of Canteen's plane, well placed accuracy of your shots, or the usage of homing shots.

Pilot Bulldog has two attacks that he performs by first jumping off the fighter:

On the fighter itself, the Yankee Yippers inside the four hatches can come up and throw three tennis balls up, and they fall down on the player. In Simple Mode, they attack less often. In Expert Mode, they attack much quicker.

After a certain amount of health is depleted, the Dog Chinook flies in the background on the left, and starts firing fire hydrant missiles from random locations to support Pilot Bulldog. The fire hydrants are basic projectiles that follow the player, and can be destroyed. In Expert Mode, they are fired more often and reaches the threshold quicker.

Canteen's plane slowly rises up, and the four Yankee Yippers appear around the plane in a plus shaped formation taunting the player(s), slowly revolving around it clockwise or counter-clockwise via their jetpacks. All of them have their own separate health bars.

The Yankee Yippers randomly bark out letters at the player that spin around and spell "BOW" or "WOW". The letters move towards the player's last position, and keep moving the same direction even when dodged. As each puppy is taken out, the remaining Yankee Yippers bark letters at the player faster. The letters have a chance to be pink and can be parried. In Expert Mode, they bark more often.

When a puppy is knocked out, their jetpack smokes up and explodes while the puppy waves their arms around with a close up panicked expression, and then flies away in the background. As soon as the last one is defeated, the Chinook comes closer. It is possible to tell how much health the Yankee Yippers have by looking at the shade of the exhaust that they emit, when they are gray they are on their last leg. Hitpoints = 59.5/68

In Simple Mode, this phase is skipped as the Yankee Yippers abandon the plane and not return and the Chinook comes the same way when going into Phase 3. Hitpoints = 238/272

After the Yankee Yippers retreat following their defeat in the second phase, Canteen's plane flies back down, as the Dog Chinook flies in the background, and then stops in the middle, behind the plane. It then brings its paws forward and to the sides of the screen, grabbing the camera's sides.

Laser rays randomly come out of the the Chinook's paw pads, aiming down towards the plane, shooting a diagonal laser. One sequence will have a pair of rays at the bottom, shooting a pink laser across the player's standing area, requiring a jump to avoid. This laser can be parried with an early jump and a parry on top of it, or more difficulty, with a well timed parry dash from Ms. Chalice. One to two lasers can be fired at once, this is done three times in a random sequence. The lasers can be shot, and count towards depleting the bosses' health. In Expert Mode, two to three lasers can be fired at once.

After the laser sequence, the Dog Chinook twists its body, and flips the entire screen counterclockwise onto its side as it does so. The Chinook opens its mouth to reveal the control room on its tongue where Pilot Saluki is at the controls, vulnerable to being hit as she attacks. The plane is now right between the jaws of the Chinook, just barely over the bottom jaw. Keen eyes may notice the square teeth of the Chinook become fangs when swapping to this sequence despite the lack of a separation between its sets of fangs. In Simple Mode, the Chinook does not twist the camera.

Pilot Saluki starts pressing buttons on the controls quickly while she has her eyes closed. Red and yellow dog bowls begin to fall out from the Chinook's eyes. Both bowls fly towards the player when they've reached a certain point of their fall, which is dictated by their colour and affects how to dodge them. Red bowls fly across at the player's standing ground, requiring a jump to avoid. Yellow Bowls fly across a bit higher, requiring the player to move under them, as jumping over them may not be possible. In Expert Mode, the attack spawn bowls more rapidly.

After Pilot Saluki stops pressing buttons to dust off her hands as she waits for the attack to conclude, the Chinook snaps its jaws back together, and flips the screen counterclockwise again, returning to the laser sequence, but the screen is now upside down. This repeats again with the transition to the bowl sequence being turned counterclockwise once again (with the plane on the left side of the screen and players falling to the camera's "left", and then back right-side up on the next laser sequence, repeating until the boss is defeated.

There are two controls for this part: R-Control A and B. A will continue to treat the player as if they are right side up relative to the plane they are standing on. B will treat direction input relative to the normal screen, for example, left and right will still move the character(s) to the direction you are pressing even when upside-down, while up and down moves them "vertically" on the plane platform when it is the bowl sequence.

This boss has two knockout animations depending on when you finish the boss:

During Phase 2, the Yankee Yippers' jetpack produces white exhaust gas, when they are nearly defeated and left with 21% of their health (12.5/14.3), it produces grey exhaust gas. By carefully damaging all four of them into that state without knocking any of them out, the secret phase will commence. Their remaining health will be added to the secret final phase.

An alternate final phase will start, the Chinook comes from either the left or the right side of the screen and eats them all, licks its teeth, and flies away. It comes through the foreground and wrap back around then brings its paws forward and to the sides of the screen like normal. However, instead of the laser cannons coming out of paw pads, the Yankee Yippers and Pilot Saluki come out instead.

They all shuffle around the six paw pads and the Chinook does not attempt to twist the screen sideways or upside-down. Only the damage to Pilot Saluki count toward damaging the boss.

When they are knocked out, Pilot Saluki and the Chinook have the same knockout animation as when they are in the laser sequence. The Yankee Yippers will be dazed, one looses some teeth and gets a bump on their head saluting, and one is coughing with their eyes closed. Hitpoints = 680/777

The Howling Aces' Knockout scene during the Laser Sequence.

The Howling Aces' Knockout scene during the Bowl Sequence. 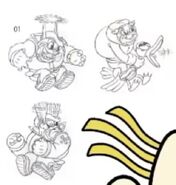 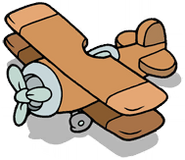 Saltbaker fixing their planes in the end credits.

Pilot Saluki in the end of the credits.