Sugarland Shimmy is a level on Inkwell Isle Two, where the fight with Baroness Von Bon Bon takes place. It is represented on the map by a muffin-shaped building. This is one of the three initially available levels on the isle along with Pyramid Peril and Carnival Kerfuffle. Once you defeat Sugarland Shimmy, you unlock Funfair Fever, Aviary Action!, and an NPC that looks like a cookie.

The level is set in a candy world, with lollipops and massive cakes. Whippet Creampup (Baroness' castle) stays constantly on the right, from where she sends her minions from. Once you reach the final phase of the fight the castle will start moving, chasing the player through the sugarland.

Before the battle begins, Baroness Von Bon Bon will be standing in front of Whippet, with a giant candy cane. She'll proceed to use her finger to chop her head off (foreshadowing the final phase), then she'll be pulled into her castle will the candy cane. This battle is very unique, because the first three phases are random. There are multiple mini-bosses that she'll send out. The mini-bosses in this level are Kernel Von Pop, Sir Waffington III, Lord Gob Packer, Sargent Gumbo Gumbull and Muffsky Chernikov. In Simple mode, you won't encounter Muffsky. 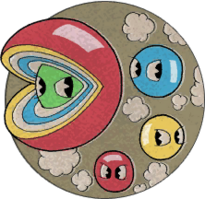 Lord Gob Packer is a giant jawbreaker, which will chase you around the map along with a tiny jawbreaker.

Once you defeat Lord Gob Packer, he'll stop, then crack into pieces. He cracks layer by layer, then revealing his head, which has cross eyes and a halo on top. He'll then fly to the top of the screen. This animation is very long, so you have some time to take a break after you finish him. 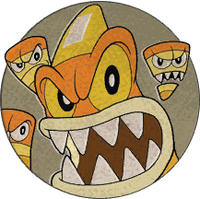 "For me, a sweet tooth is fiendishly uncouth!"
—Kernel Von Pop, Death screen

Kernel Von Pop is a giant candy corn. He'll go in an 8 like pattern, while sending out mini candy corns that'll fly up to the top of the screen.

It is recommended to dash or jump when he gets too close, and to stay away from him while he's airborne.

Once you defeat Kernel Von Pop, he'll fly up with his teeth being crooked. He'll look crazy, and his layers will jump off then back on. 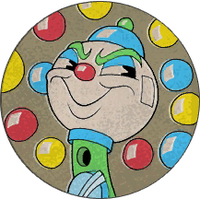 "I chew 'em up and spit 'em out."
—Sargent Gumbo Gumbull, Death screen

Sargent Gumbo Gumbull is a gumball machine that'll run around the map. Occasionally, he'll spit out gumballs everywhere, which rain down onto the players. This is actually the easiest of the phases, so do not panic.

It's recommended to try to get close to him and use your Roundabout. Focus on the gumballs and dodge them, left and right. If you have the Smoke Bomb charm equipped, you are able to dash through him. You may use this if needed.

Once you defeat the Sargent, his head will explode and he'll run away. 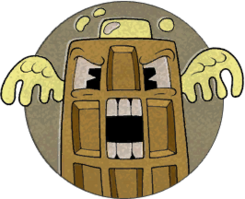 "Straight off the iron and too hot to handle!"
—Sir Waffington III, Death screen

Sir Waffington III is a giant waffle with a butter hat and syrup wings. He'll fly around the screen, and occasionally split himself apart, hurting the player.

It is recommended to use the Chaser to get Sir Waffington III. Try to keep distance from it as much as possible, but do not get too close to the castle. In case it gets too close, expect it's disassembling to find a way to dodge.

Once you've done enough damage, Sir Waffington III will once again disassemble, but this time, it doesn't hurt you. 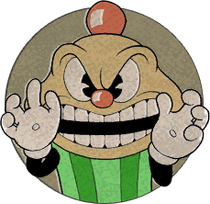 It is recommended to dash through him when he's about to land near you. Beware of his splash damage. Note that you need to dash away quickly before his third bounce instead of sitting there waiting for it to land, as its skill of bouncing from walls is more powerful than Goopy Le Grande's. 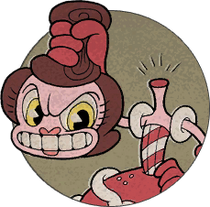 Phase four has Baroness Von Bon Bon order her castle to chase after Cuphead and Mugman. She'll throw her head over to the player while it happens. During this, peppermint will roll out from the castle, which can be parried.

During this phase, use the platform to your advantage to dodge the head and parry the peppermint to fill up your super meter or give you more movement.

After dealing enough damage, Baroness Von Bon Bon is defeated and she cries while her castle pounds it's fists on the ground. Note that you can only actually damage her by shooting her body, so it is best to use the Chaser for this phase.

However, this phase is very different in Simple mode, since Baroness Von Bon Bon would just shoot cotton candy at you instead of ordering her Castle. As they can be easily destroyed, just keep shooting, stay off the ground as you don't have to deal with the Jelly Bullies Squad.

Sugarland Shimmy has many homages to classic candy levels from video games such as Mickey's Castle of Illusion and Kirby's Dreamland. The imagery is based on cartoons like Van Beuren's Candy Land and Columbia's Bon Bon Parade, which was a major influence on the way the candy was rendered in the game.[1]

Background
Add a photo to this gallery

Retrieved from "https://cuphead.fandom.com/wiki/Sugarland_Shimmy?oldid=60211"
Community content is available under CC-BY-SA unless otherwise noted.