"Straight off the iron and too hot to handle!""
—Sir Waffington III, Death Screen

Sir Waffington III is one of the multiple minor bosses fought in the Sugarland Shimmy boss level of Inkwell Isle Two. He is a subject randomly summoned by Baroness Von Bon Bon, the level's primary boss.

Sir Waffington III is a large, brown-colored, slightly cube-shaped, flying waffle with squarish eyes and nutcracker-like teeth. His "hat" and a pair of wings appears to be made out of butter.

His death screen seems to suggest that he has a comedic "holier-than-thou" nature, judging by the fact that he claimed to be "straight off the iron" and "too hot to handle."

He will be selected randomly by Baroness Von Bon Bon for the first phase of the boss battle. Sir Waffington III, after being selected, flies around the arena and will split himself into 9 pieces in a spread attack and reverts back to his original form. In Simple mode, he doesn't do anything besides fly around. In Expert mode, he will only shoot either in the four cardinal directions at first, and then fire the diagonals, or vice versa.

When defeated, he will break apart as if he was doing his attack but the pieces will fly off the screen and the teeth section will implode on itself and disappear.

Sir Waffington III about to split for attack. 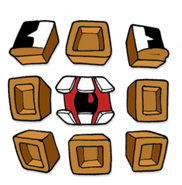 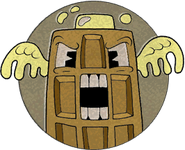 Sir Waffington III's icon in the game over screen.
Add a photo to this gallery
Retrieved from "https://cuphead.fandom.com/wiki/Sir_Waffington_III?oldid=53880"
Community content is available under CC-BY-SA unless otherwise noted.