"I chew 'em up and spit 'em out."
—Sargent Gumbo Gumbull, Death Screen

Sargent Gumbo Gumbull is a minor boss fought in the Sugarland Shimmy level of Inkwell Isle Two, and one of the several subjects summoned by the level's primary boss Baroness Von Bon Bon.

He is a devious-looking anthropomorphic gumball machine sported scampering red legs with brown shoes. He has a red nose, a glass head, green eyebrows, a green body with a blue switcher, and a blue cap that resembles a hat.

Sargent Gumbo Gumbull's death screen suggests that he has a habit of talking tough.

Sargent Gumbo Gumbull will be selected randomly by Baroness Von Bon Bon for the first phase of the boss battle. Upon summoned, he runs around the arena and shoots gumballs up in the air as they rain down on the players. In Simple mode, he scrambles across the entire arena but won't fire gumballs. In Expert mode, the gumballs rain down faster.

When defeated, his head will shatter apart and his body will scramble away to the left of the stage. 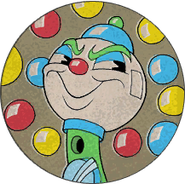 Sargent Gumbo Gumbull's icon in the game over screen.
Add a photo to this gallery
Retrieved from "https://cuphead.fandom.com/wiki/Sargent_Gumbo_Gumbull?oldid=53878"
Community content is available under CC-BY-SA unless otherwise noted.