Sally Stageplay is a boss in Inkwell Isle Three fought in Dramatic Fanatic. She was seen in the E3 2017 trailer for a couple of frames.

Sally Stageplay is one of the sole human characters in the game, alongside Captain Brineybeard and Dr. Kahl, and she, along with the other characters, has a very basic design.

Sally is a young woman, styled like 20s and 30s and possessing a lanky figure. She has fair skin, rosy cheeks, close-set pie eyes, a medium-length nose, red lip-stick, and curly/puffy pale-blond hair (clearly a towhead) pulled into three segments (two pigtails and one ponytail) held in place with turquoise hair-bands.

In her start-up sequence of her first phase, she wears a simple, white wedding dress with elbow-length, puffy sleeves, a frilled waist-line, a floor-length skirt, and transparent veil, and a bouquet of coral flowers.

In her third phase, she appears as a large cardboard cutout of herself, bearing goddess outfit. She has curly red hair in puffy pigtails and magenta eye-shadow. She wears a deep scarlet dress with gold shoulder pads, no shoes, a sash-like belt, gold and ruby earrings, a gold helmet with a large crescent on her head, and two pairs black wings, one with bird wings and the other with bat wings,

In her final phase, she wears a white dress with blue trims, a golden halo, and blue angel wings, and (like in Phase 3) is barefoot.

Sally loves fame and getting attention on her part, as seen when she calls herself a starlet and telling Cuphead and Mugman to get off the stage if they lose to her. When it comes to acting, she seems to take her job very seriously to the point of treating her battle with the brothers as a part of the play she's in.

In the good ending, Sally can be seen kissing the man who played as her newly married husband at the performance, showing that she does have feelings for him.

Sally's Husband, judging by his behavior in the background, appears to be more of a pacifist in contrast to other Inkwell Isle residents. He also appears to be a coward to a small extent.

The audience is cheering for the start of the play. Sally is seen wearing a bride's dress holding a red bouquet before ripping it off to reveal she's wearing a turquoise dress and boots and armed with an orange-red parasol. Meanwhile, the curtain rises up to reveal a wedding scene, with who appears to be Sally's Husband panicking, along with a frightened priest in the background.

In her first phase, Sally has four attacks that she alternates back and forth or uses one attack more often than other:

After taking enough damage, the priest is scared and hide under the stand. Sally uses her parasol to teleport into the offstage and rides on the back of a cardboard car from the left as her newlywed husband gains a boost of confidence, driving her away. Hitpoints = 385/392/476

"Stay away from center stage or succumb to the power of a starlet's rage!"
—Sally Stageplay, Phase 2 Death Screen

The second scene is set in front of what seems to be Sally's house. This probably takes place long after the wedding, since Sally and her husband have started a family. After the curtain rises, Sally appears from the opposite side of the stage where the player(s) are standing with a shocked expression before pointing angrily in the player's direction, swearing revenge for the player(s) crashing her wedding.

In this phase, Sally still attacks with her diagonal kicking and fan throwing, but she loses the parasol teleporting attack. She can now use a new move which involves spinning her parasol to release two wind-up mouse toys on each side that will travel along the ground, up the wall and across the ceiling. Once they reach the top and are over the player(s), they will drop down onto them. In Simple mode, Sally will only release one wind-up mouse toys on each side, and she will still do the parasol teleporting attack in this phase.

In the background, Sally's children can damage the players by throwing a milk bottle down on them through the house's nine windows. They start crying when defeated. In Expert mode, Sally's children appear more often. Hitpoints = 20/20/20

Sally's husband can be seen in the background, hiding in the bushes near the house. He seems to be distressed because Sally's battle is too much for him.

After taking enough hits, Sally appears dressed as an angel and is carried away to the top of the stage, as if she died. Sally's husband will start crying in the background. Hitpoints = 385/406/493

"Good riddance -- go away! It is time for my soliloquy."
—Sally Stageplay, Phase 3 Death Screen

The next scene is set in what is possibly Heaven, where players must now face Sally's goddess form, which is made out of cardboard and controlled by the people above.

She now has three brand new attacks that differ to her previous. A cardboard cutout will appear at the upper left corner showing which attack is about to be executed:

In Expert mode, the attacks are executed at a faster rate.

Once players deal enough hits, the goddess form is defeated and twitches, and is brought up off screen. In Simple mode, the battle will simply end here with the goddess form twitching before the ovation happens. Hitpoints = 330/406/493

In this final, yet slightly messed-up scene, Sally returns in her angel outfit to receive a standing ovation from the crowd as she is being carried from left to right and back. In the background are the priest, Sally's children and her husband, who are also receiving praise from the audience.

She does not have any attacks, but rather her parasol slowly falls down from above spinning on its tip and chasing the players relentlessly.

The parasol is not the only danger that should be avoided, as the crowd can also throw roses onto the stage. These roses are thrown up in the foreground then they fall down on the stage where they went up. Player(s) can accidentally run or dash into them, especially when the hitbox of the roses linger on the ground for a short while. Some of them can be parried. In Expert mode, the roses are thrown at a faster rate.

After taking few more hits, Sally is down for good as her dress is ripped and she has a black eye while barely audibly yelling "Ow!" in pain. Meanwhile, her family and the priest in the background look shocked and disappointed, as one child covers her face with her hands. Hitpoints = 196/238

In the first phase, each time Cuphead and/or Mugman lands on the prop cherubs they will be weighed down. When the cherub clicks, the spiky chandelier will shake, creates a "ding" sound, and be slightly slanted afterward. When both cherub are lowered, phase 1 suddenly ends after Sally's husband runs under the shaking chandelier, as he looks up with his eyes popping out of his head it crushes him. Sally then teleports into the offstage walking in from the right and beginning to mourn her partner's death as the curtain falls. Jumping on the cherubs can be done with two methods: When Sally blows a pink heart at the players, it can be parried for extra height to jump on cherubs; Using the Whetstone charm can trivialize the process as you only need to be close to Sally, with her teleports and kicks aiming towards the player(s), it will be quicker than waiting for parries and standing in the right direction for the pink heart.

In the second phase, the set now changes to St. Timothy's Nunnery instead of Sally's home as she swears revenge for her husband. It implies Sally has become a nun there. Instead of her husband worrying Sally behind the bushes, it is the priest that looks over the battle. Also, instead of her children throwing baby bottles straight down, a nun in the nunnery throws a ruler aiming at the player(s), which sometimes can be parried. She covers her face when defeated. In Expert Mode, the nun will appear more often and the ruler is faster. Hitpoints = 15/20
As Sally is defeated, the priest takes off his hat mourning her "death".

In the third phase, her husband comes back in a god form with Sally's goddess form, being pushed out from the left side of the screen. Sally's attacks are still the same. Her husband attacks as well by summoning a cherub, which is the male baby from the normal phase 2. The cherub pushes a spinning cardboard fire on wheels out and travels through the ground. In Expert Mode, the fire travels faster and their spawn rate is increased. The husband has his own health pool but it is combined with Sally's phase 3 so the fight lasts as long as the normal path with phase 1 being skipped. They are defeated simultaneously. Total Hitpoints = 756/893

The final phase of the fight is mostly unchanged, however the nun will join the priest in the background of the fight instead of Sally's husband and children. Still, they are shocked and disappointed when Sally is defeated respectively.

Sally in the bride dress before the battle commences

Sally and her umbrella during the battle

Sally with her husband on the car

Sally after ripping off her wedding dress 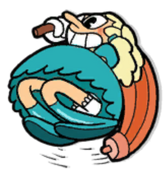 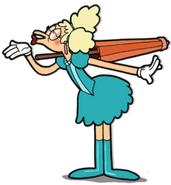 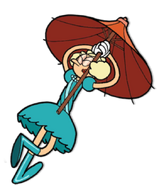 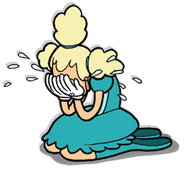 Sally in her car 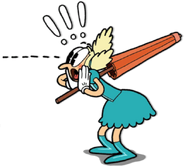 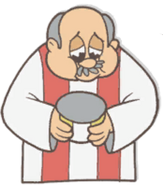 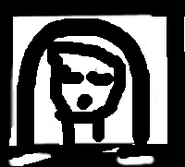 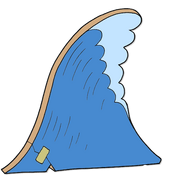 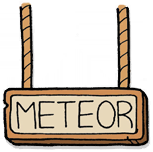 Sally as seen in the good ending

Beta art for her parasol attack 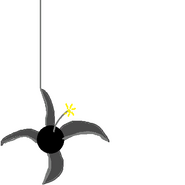 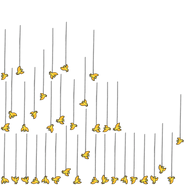 There is an unused sprite sheet for a prop bird, it is an prop that supposed to spin round and round above Sally's head when she knocked out.

There is an unused attack called "SHURIKEN BOMB" that was scrapped. This attack was going to be used in phase 1 and potentially 2, Sally would throw the shuriken bomb instead of the fan, it will split into two small ones that arcs both sides. In Expert mode, the small shuriken bomb will each split into two more tiny ones.

In the final phase when Sally is receiving her standing ovation, some fans would have thrown explosive projectiles at the stage instead of just roses, referencing when people hated the stage show in cartoons, they would throw tomatoes and random objects on stage where it would make a mess.

Sally Stageplay's animation is an amalgamation of some of the team's favorite cartoon and fighting game characters topped with ComiColor flair. There is obvious influence from Popeye's Olive Oyl with her lanky limbs and floppy feet, but even more influential was Samurai Showdown III's Shizumaru Hisane with his parasol weapon attacks.[1]