Cherub
The as-yet unnamed husband of Sally Stageplay (aka. Mr. Stageplay) is a character and a secret optional boss in the Dramatic Fanatic level of Inkwell Isle Three.

In the first phase of Sally's fight, her husband is shown wearing a black tuxedo with a top hat.

In the second phase, he wears a white button up shirt with a light blue jumper.

In his battle form, Mr. Stageplay has light blue skin, with yellow hair. He wears an indigo loin cloth and a white piece of fabric with gold, blue and pink accents, a pink olive branch headdress and a gold halo. He holds a bunch of purple grapes.

Judging by his behavior in the background, Sally's husband appears to be more of a pacifist in contrast to other Inkwell Isle residents. He also appears to be a coward to a small extent.

In Phase 1, Sally's husband will perform different actions based on what is currently happening in the battle. When Sally takes damage, he pulls his hat to his head and panics. When Cuphead takes damage, he jumps up in delight and performs a heel click and his bow tie spins like a fan. During his idle animation, he paces back and forth.

In Phase 1, when Sally blows the pink heart at the players, it can be parried to allow the player to jump up on cherubs hanging from both sides. This can also be achieved with Whetstone parrying Sally or Ms. Chalice's double jump For each time the player(s) lands on the cherubs they will be weighed down, and the chandelier will shake and make a sound. When both are lowered, Phase 1 suddenly ends as the chandelier falls on the husband and crushes him (as the husband looks up with his eyes popping out of his head), as Sally goes into the background plane and begins to mourn her partner's death.

In the third phase after beating the second, her husband will come back in a god form with Sally's goddess form using cardboard, coming from the left side of the screen. Sally's attacks are still the same. Her husband will attack as well by summoning a cherub (the male baby from the normal Phase 2), which will push a cardboard fire wheel that travels in a straight line through the ground. In Expert Mode, the fire wheels will travel faster and their spawn rate is increased. Hitpoints = 350/400

The husband has his own stamina but it is combined with Sally's. When they are defeated, the husband twitches and pull back off the stage. the Total hitpoints = 756/893 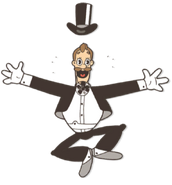 The sprite of Sally's husband crying as Sally "dies"

The husband's knockout sprite as a boss

Sally's husband as seen in the good ending