Rumor Honeybottoms is a boss in Cuphead, making her lair in Honeycomb Herald. She resides in Inkwell Isle Three. Cuphead fights her in a vertical autoscroll level that is constantly filling with boiling honey and resembles a cross between a workplace and a beehive.

Rumor is a very large queen bee. She has red lipstick, a round yellow nose and a yellow and peach colored muzzle.

Her primary outfit consists of a black and yellow striped bell-shaped dress with a white trim at the end of it, a black ribbon belt around the waist, and long, black sleeves with yellow cuffs. She also wears a pair of generic white gloves, and despite her full body not being shown in-game (even in the good ending) she has yellow legs and wears a pair of black high heeled shoes.

Being the queen, she wears a bronze crown and wields a large bronze honey dipper that acts as both a scepter and a magic wand. Despite her size, her wings are quite small but still able to hold her body at the top of the screen for the entirety of the second phase.

During the third phase, Rumor uses a magic spell and turns herself into a yellow and black stripped airplane with a peach colored cockpit alongside a crown design on the back. She has yellow wings with black rings and white tips (with the white tips being her hands), as well as jet engines that act like rocket launchers with small white wheels and the same stripes as the rest of the plane. The honey dipper is now on the top of the airplane and acts as a propeller. She is also depicted with shark-like teeth.

Rumor is one of the more clever bosses, using Security Bee as cannon fodder to test the abilities of her enemies. She seemingly fights Cuphead and Mugman mainly to keep her own honey protected, rather than preserve her own soul as hinted in the death scene in Phases 1 and 2. She may also be an amateur in transformations, as she uses a guidebook to help her transform. It may also be that she was confident that she would be able to beat any intruder and ran out of attacks to use. She also seems to be partially mindful of what's above her, as evident by the pained groans from when she tosses the spellbook aside.

Rumor is seen with a knife, fork, and a napkin bib, hungrily looking at Cuphead and Mugman while licking her lips, and then snapping her fingers to call Security Bee, who is promptly heard blowing a whistle in the distance off screen before flying in, as if on cue. Then, she retreats off the top.

Meanwhile, worker bees with suitcases fly across the screen, looking very tired form work. They can be defeated. Hitpoints = 8/8/8

Throughout the whole fight, the bubbling honey at the bottom of the screen is continuously rising upwards, and players have to jump up hurriedly to avoid the honey by using the platforms. The honey appears in the first phase and the second phase only, as Rumor forces the players to ascend in the third. In Simple mode, the scrolling section is significantly slower. In Expert mode, it is slightly faster.

After taking enough damage, Security Bee will suffer an injury to his shoulder and a plaster will appear in that region. He then departs, rubbing his shoulder and moaning "Owww..." in pain, flying off the screen to the left as Rumor intervenes to continue the battle. This commences phase 2. Hitpoints = 250/264/336

In this phase, the worker bees will stop coming out and Rumor will appear on either of the screen and use her honey wand to cast two projectiles of the following spells:

In Simple and Expert mode, she only casts each spell one time.

Occasionally, she shows up in the middle dropping her head down to the bottom screen, which is connected by a chain to her body. She chews and spits out six bee missiles on both sides that cover the entire arena in an 'S' like pattern. When the missile is turning around occasionally it can make a drifting car sound. In Simple mode, she spit them out at a much slower rate, they move slower but their turn is tighter. In Expert mode, she always shoot out four missiles.

In Simple mode, she starts with only casting her spells and can cast them randomly, and the worker bees are still appearing during this sub-phase. After taking enough damage, the worker bees will stop appearing and she uses the "Bee missile" attack until she is knocked out, as she closes her eyes still with her head being lowered with the chain.

In Regular mode, she can start randomly with all three of her attacks, but the cycle is always bee missile, sphere spell, tetrahedron spell and repeats.

In Expert mode, the pattern is always bee missile, cast a random spell, bee missile, cast the other spell and repeats. With her only casting one spell each time, she is trying to stay off-screen often and change up her attacks often while letting player deal with the the platforming as well.

After taking enough damage, Rumor will flip her magic book to supposedly find a new spell after which she chants the spell with her eyes glowing and transforms into a fighter plane. She then flies downwards off-screen and reappears at the bottom screen, which commences the final phase of the battle. Hitpoints = 750/432/490

In the final phase, players now fight Rumor in her airplane morph spell on the bottom screen. She will move back and forth and attack by firing off fist missiles that has a weird set path, it move in a swirling motion to throw off the player(s). In Expert mode, she can fire two simultaneously.

Occasionally she will lean to either side and turn that side's wing into a buzzsaw to slice up the players if they are above her, which is telegraphed by her leaning to the sides of the stages and the sound of the buzz saw revving up. In Expert mode, she can chain two of these attack together. She would take a brief moment of staying on the same side not moving then start revving up the buzz saw again to swing bad to the other side.

After taking enough hits, Rumor is defeated as her airplane form malfunctions, swinging her wings and spinning her bright red head with crossed eyes and sticking out her tongue. Hitpoints = 504/574 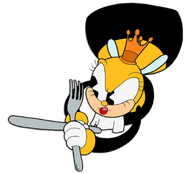 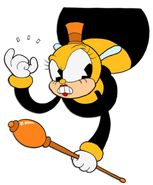 2nd part of the intro 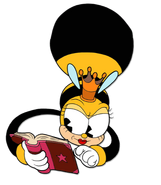 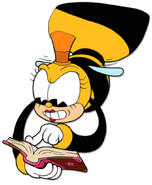 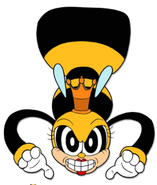 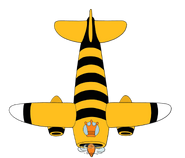 Rumor flying across the screen 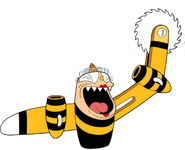 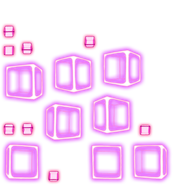 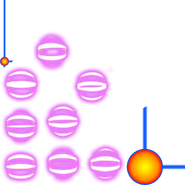 Rumor as seen in the good ending 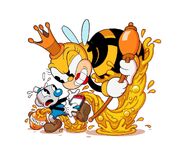 An attack called "BlackHole" is identified alongside the sphere and tetrahedron spells. This spell seems to be similar to the tetrahedron, it would have shot projectiles on the axis it turns in the recreation video or alternating between up/down and left/right, rather than the corners like the tetrahedron. The movement could be going perpendicular to the axis for the most coverage of the spell's shots. Both the spell and its projectile can be parried.
As the name of the spell suggests, the attack may pull the player towards the cube. It may have been too chaotic when two cubes are cast to limit the player's action when the battlefield is always scrolling, pulling them to the bottom-screen honey.

Rumor Honeybottoms was inspired by strong guiding toons from cartoons including Fleischer Studios' Ants in the Pants and well as their 1941 animated feature Mr. Bug Goes to Town. Her design was a reference to Honey Woman, an unused boss character from Capcom's Mega Man 9. Her intro is a nod to Q-Bee, another Capcom favorite of the team, Darkstalkers 3. Some of her characterization was influenced from the Fleischer cartoon, Cobweb Hotel.[2]