"You'll never best a bluff, persevere a peak, or curb a cliff -- just give up now!"
—Rugged Ridge, Death Screen

Rugged Ridge is one of two Run and Gun levels located on Inkwell Isle Three. It is based off of surrealist art and Greek mythology. You can start this level by interacting with the target on the ground on the western side of the area. This can be accessed by heading through the locked gate that opens after completing the Honeycomb Herald level.

These are the statues that are seen in section 3:

There are some statues which seem to correlate with characters in the game. For example:

At the beginning of the final section, a head can be seen, it is presumed this head belongs to one of the suits.

There are four sections in this platforming level: 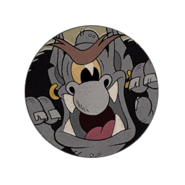 The Cyclops' mugshot when you die during his section 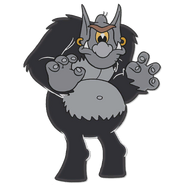 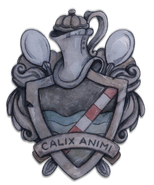 A statue of the Legendary Chalice

A statue of an old teapot

A statue of a saucer

A second statue of a saucer

A statue of a cup about to throw a discus

A broken statue of a fork archer

A statue of a spoon carrying three cups

A broken statue of an unidentifiable spoon-like figure

A statue of a knight or a suit of armor

A pencil test of the clay golem walking