Cuphead Wiki
Register
Don't have an account?
Sign In
Advertisement
in: Pages with reference errors, Characters, Bosses,
and 3 more
English

Ribby and Croaks are a boss duo in Cuphead. They are fought and encountered in the level Clip Joint Calamity on Inkwell Isle One. Although they are separate during the first two phases of the fight, they still share the same health pool.

The duo seem to be wood frogs, but Croaks is a brown frog with a light salmon underside and he wears a maroon belt, brown boxing gloves and red pants/leggings. Ribby is a green frog who is shorter than Croaks, and has a yellowish white underside. He wears red boxing gloves, a red belt and white pants/leggings.

Ribby and Croaks are well-meaning hooligans with hearts of gold and a lot of moxie—sometimes a little too much moxie.[1] They were tough fighters born in the worst environments, as implied in their quotes. The fact that Ribby bawls and Croaks bang his fist on the ground in anger when defeated in Simple mode implies that they may be somewhat dramatic and perhaps sore losers (although Croaks is such in a more aggravated way while Ribby is merely a wimp). Also, Ribby seems to sacrifice himself in order to help Croaks be stronger.

Before the battle, Croaks makes a taunt followed by Ribby, who snarls at Cuphead and Mugman with shaky legs.

In the first phase, the two frogs take turns attacking the players in a set pattern that is easily memorized and avoided:

In Expert mode, both Ribby and Croaks do their attacks in unison, rather than individually.

Once taking enough damage, Ribby rolls to the other side, attempting to damage the players, crashing into something off-screen. In Simple mode, Ribby rolls slower, In Expert mode, he rolls faster. He then comes back on the left side, thus commencing the second phase of the battle. Hitpoints = 546/408/494

"Crude and bad, 'cause we're from the wrong side of the lily pad."
—Ribby and Croaks, Phase 2 Death Screen

In this phase, players are now surrounded by Ribby and Croaks in a pincer attack, with Ribby on the left and Croaks on the right. They will now attack simultaneously, although Croaks' attack is a little bit longer than Ribby's.

Ribby will periodically slap three ringed ball-like projectiles bouncing up and down, while Croaks will spin his body rapidly like a fan, blowing the players away from him and towards Ribby's attack in order to damage them. In Expert mode, the ringed balls bounce faster, and Croaks blows the players away with more force. Ribby's attack can be avoided by running away from it as it bounces, dashing or smoke-dashing away, even while being blown away.

In Simple and Expert mode, Ribby will be throwing energy waves like in the first phase after rolling. However, the pattern doesn't reverse after the third energy fist like it does in the first phase. Instead, it simply ends. He will then alternate between throwing energy wave punches and slapping ringed balls, of which he can also choose to slap either once, twice or thrice.

After taking enough damage, Croaks will open his mouth and Ribby will attempt to damage the players again by rolling at Croaks. After that, Ribby will then roll into Croaks' mouth, making Croaks swallow Ribby and causing Croaks to transform into a slot machine. This commences the final phase of the battle. In Simple mode, the battle will simply end with Croaks pounding his fists to the floor, and Ribby crying. Hitpoints = 854/714/741

"You went for broke and now you're croaked!"
—Ribby and Croaks, Phase 3 Death Screen

In this phase, the giant slot machine is initially invulnerable and will spew coins continually. In expert mode, coins are fired more frequently.

By triggering the crank via a parry (which does not count toward the parry total), the machine will turn vulnerable and cycle through different symbol patterns to indicate its impending attack. It will open a giant metal hatch in its bottom half which shoots out moving platforms with various properties, all of them have spikes on the side and deal contact damage, the spawn rate will slowly increases as well. There are three possible set of chip platforms that can be spawned:

In Expert mode, all the platforms spawn and move faster.

When sufficient damage has been dealt to the slot machine, it malfunctions and and violently rumbles, with skull icons on its body and crossed out eyes. Hitpoints = 578/665 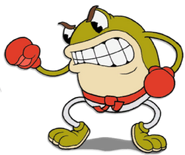 Ribby in the intro 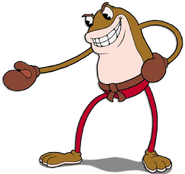 Croaks in the intro 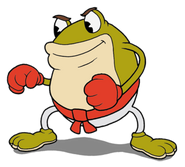 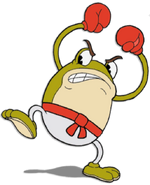 Ribby about to attack 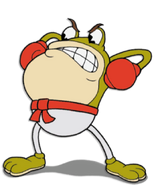 Ribby about to clap 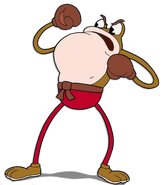 Croaks about to attack 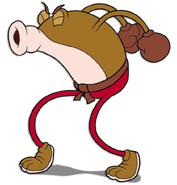 Croaks spitting out a firefly

Croaks as a fan 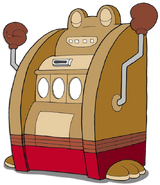 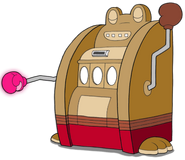 The slot machine about to attack 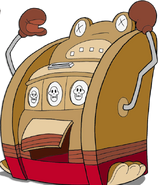 Ribby knocked out in Simple mode 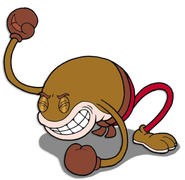 Croaks knocked out in Simple mode 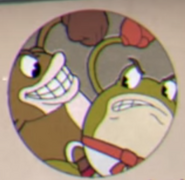 Ribby as seen in the good ending

Ribby and Croaks in The Cuphead Show!

Ribby and Croaks in the Humble Store Spring Sale advertisement

In the final phase, there is an unused asset that is an Oni or a Devil for the slot machine. When landed on, it would have combined all four types of chips into one attack spawned chips that move on the ground, with the new one being shooting pink fire upward continuously for the player to parry over. In the showcase video, it is a slightly recolored version of tiger chips having pink hurtbox and green parry area, probably with pink version of the fire from bison chips if it made it into the final game.