The Radish is an optional, minor boss in Cuphead. He is part of The Root Pack, located in the Botanic Panic! level of Inkwell Isle One. The Radish is summoned if the player chooses not to attack Ollie Bulb, who summons him after smiling and returning underground.

After he is spawned, the player's progress on the death screen will be replaced with a question mark, indicating this is an optional, or "secret" path.

He is an anthropomorphic radish character with green eyes, triangular sharp teeth, a purple nose and eyebrows, and brown arms. Radish is much smaller than the other members of the Root Pack, being roughly the size of Cuphead and Mugman.

Radish seems to be easily agitated and quite aggressive, given his expression throughout most of the fight.

The Radish has one attack. Immediately after popping out of the ground, he spins across the ground like a top while Chauncey Chantenay attacks as usual. In Expert Mode, Radish has a higher top speed and acceleration, he also jumps out quicker.

When defeated, he sits on the ground with a dazed expression before slicing apart. 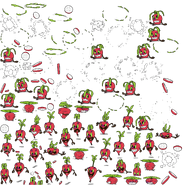 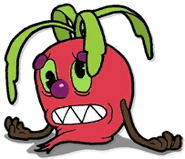 A Single-frame of Radish's KO

Radish coming out from the ground

Dizzy radish
Add a photo to this gallery
Retrieved from "https://cuphead.fandom.com/wiki/Radish?oldid=54713"
Community content is available under CC-BY-SA unless otherwise noted.