"You gots to equip those new purchases if you want to use them. Look at your equip card, ya bums!"
—Porkrind, after Cuphead and/or Mugman buys something.

Porkrind is the shopkeeper throughout Cuphead. He sells charms and weapons to aid the player in boss fights, and appears in every world of the game except Inkwell Hell.

Porkrind can be found in three different locations: 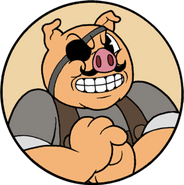 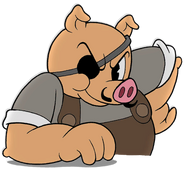 Porkrind checking his watch.
Add a photo to this gallery

Retrieved from "https://cuphead.fandom.com/wiki/Porkrind?oldid=55716"
Community content is available under CC-BY-SA unless otherwise noted.