"Doggone! We got ourselves a good ol' fashioned honey heist!"
—Bob The Bee, Death Screen

Bob The bee is a minor boss who is summoned upon Rumor Honeybottoms's call, fought in the Honeycomb Herald boss level of Inkwell Isle Three.

Bob The Bee is a much smaller bee of stocky build, with a shaggy mustache and a distinctive auburn nose, wearing an Edwardian policeman uniform and a British Constable's helmet, with white gloves, black trousers, and blue sneakers.

Bob The Bee's personality, on the other hand, is akin to that of a stereotypical civil servant, striving to protect and serve his race, as is his duty. Much like Rumor, he also believes that Cuphead and Mugman are here for the honey rather than Rumor's soul contract.

Throughout the whole fight, the honey at the bottom of the screen is continuously rising upwards, and players have to jump up hurriedly to avoid the honey by using the platforms. The honey appears in the first phase and the second phase only, as in the final phase, it is replaced with Rumor in her airplane mode. In Simple mode, the scrolling section is slower. In Expert mode, it is faster.

After taking enough damage, Bob The Bee will suffer an injury to his shoulder and a plaster will appear in that region. He then departs, rubbing his shoulder and moaning "Owww..." in pain, flying off the screen to the left as Rumor intervenes to continue the battle. This commences phase 2 for Rumor Honeybottom's battle.

It is recommended to use Lobber in this fight, as the player can hit him at almost all times. 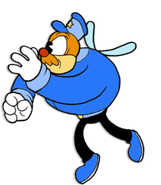 Bob The Bee throwing a bomb. 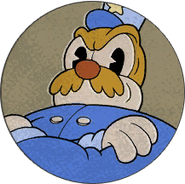 Bob The Bee's icon in the game over screen. 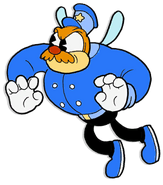 Bob The Bee idle
Add a photo to this gallery
Retrieved from "https://cuphead.fandom.com/wiki/Policeman_Bee?oldid=54592"
Community content is available under CC-BY-SA unless otherwise noted.