"You set them up, I'll knock them down."
—Pip and Dot, Death screen

Pip and Dot are a miniboss that appears in the boss fight with King Dice when landing on Space 4.

Pip and Dot are a living domino with Pip on the top wearing a blue 19th century style Stovepipe hat, along with white gloves, and his wife Dot is on the bottom wearing a gray skirt and red heels. The two halves also share a red bow, making it look like Pip has a bowtie, and Dot a hair bow.

Pip and Dot are a loving but conflicted pair with a temperamental relationship.[1] As evidenced by their defeat animation, Pip and Dot seem to be quick to get into fights with each other. Their death screen suggests that they take their roles as dominoes very seriously.

Pip looks down at Dot while raising his hat, smiling, while Dot looks back up, sweetly batting her eyes. They then notice Cuphead and Mugman and start swinging with their frown and smile alternating between the two.

For the duration of the fight, they sit on a swing. They have two known attacks:

Pip and Dot's stage can also be a hassle, as the player(s) must be constantly moving, for behind them is a wall of spikes. The player(s) also need to jump over patches of spikes on the conveyor belt floor, which can damage them if they are not careful. However, the 20-sided parriable die can be used to traverse longer sections of floor spikes. In Expert mode, the floor moves slightly faster.

When defeated, Dot will angrily kick Pip in the eyes with her red heels, presumably because she blamed her husband for causing them to lose the fight with Cuphead and Mugman. 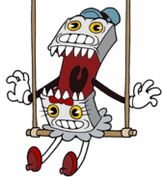 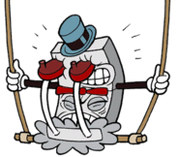 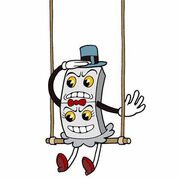 Intro end
Add a photo to this gallery

Retrieved from "https://cuphead.fandom.com/wiki/Pip_and_Dot?oldid=60673"
Community content is available under CC-BY-SA unless otherwise noted.