"This derby is over and the results are in. Last place...YOU!"
—Phear Lap, Death screen

Phear Lap is a miniboss that appears in the boss fight with King Dice when landing on Space 6. He is fought in a plane above a horse racing track.

Phear Lap is a skeletal spectral horse that wears white shoes on his feet, and yellow Mickey mouse-esque Gloves on his hands, a green visor on his head, and a collar with a red bow tie around his neck.

Phear lap's personality is that of a stereotypical derby commentator, as evidenced by his death screen quote. Also, when defeated, Phear Lap cries out money and holds several bills in his hands, implying that he bet on Cuphead and Mugman losing and lost the bet.

Before the battle begins, Phear Lap falls into his plane with his long neck falling down until his head shows up.

Phear Lap has only one attack, which is shooting a blue gift-box out of his rib cage. The boxes travel for a certain amount of time before exploding and releasing golden horseshoes in all 8 directions. One of the horseshoes is pink, and can be parried.

While the players are busy fighting him, a ghostly, robed figure appears riding its horse, resembling the Grim Reaper, who flies to the players' location and damages them unexpectedly. This figure somewhat resembles the Headless Horseman. In Expert mode, the ghostly horses appear much more frequently, and get harder to dodge as you have to dodge the presents and the ghostly robed figures simultaneously.

Throughout the battle, the foreground scenery blocks the player's view, limiting the amount of the screen they can see. 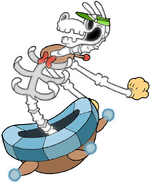 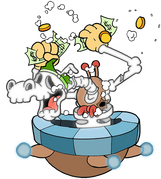 The present and the horseshoes
Add a photo to this gallery

Retrieved from "https://cuphead.fandom.com/wiki/Phear_Lap?oldid=57949"
Community content is available under CC-BY-SA unless otherwise noted.