Male (The Conductor, Lollipop Ghouls, and Head of the Train)

The Phantom Express is a boss in Cuphead that appears in Inkwell Isle Three.

It resides in the level Railroad Wrath and consists of Blind Specter, the Conductor, the Lollipop Ghouls, and the Head of the Train.

The Phantom Express is a train for the dead. Blind Specter is a light blue ghost with one large empty eye socket on their head, and two eyes coming out of their palms.

The Conductor is a very large skeleton, with his most notable feature being the conductor hat he wears. He also appears to be missing a tooth.

The Lollipop Ghouls look similar to the pistons of a train. They have large round heads being held on very thin rubber-hose style necks.

The Head of the Train is a steam locomotive with a blue face and grey-purple body, with his heart inside of his boiler. He is always seen with his teeth showing. After uncoupling from the rest of the train, he looks similar to a horse, with his body raised above his wheels by four legs and a tail that ends in a light-bulb.

Everyone on the train seems to take enjoyment in poking fun at the brothers dying. Blind Specter says that Cuphead and Mugman will count the worms that go through their corpses, the Conductor says that the train's next destination is their funeral, the Lollipop Ghouls state that the train is only for the dead, but Cuphead/Mugman would die against fighting them, thus being able to ride, and the Head of the Train states that he enjoys "bringing the fright".

Before the battle, Blind Specter stretches out of the caboose of the train and cackles maniacally in an attempt to scare Cuphead and Mugman.

Throughout the entirety of the battle, a platform will follow the train in one of three places, and will only move if the vaults on either end are parried or hit by certain objects, which can also be parried. However, Pumpkimps (jack-o-lanterns with wings) come from either side, and drop a pink ingot onto the vaults of the cart to move it closer to Blind Specter, so he can damage the player(s). The Pumpkimps can be killed by shooting at them, and the ingot can only be destroyed by parrying. The Pumpkimps appear in this phase and Conductor's phase. In Simple mode, they never appear. Hitpoints = 4/4

After enough damage, Blind Specter screams in defeat and retreats back inside the caboose and the player(s) move forward to the next part of the train. Hitpoints = 400/425/425

"All aboard!! Next stop -- your funeral."
—Conductor, Death Screen

In the second phase, Conductor pops out of the cars along with his massive skeletal arms. He attacks by slamming his hands onto two spots that players can be on, before popping in and out another car and repeating his attack; players need to move the platform to the area beneath his head to avoid damage from the arms, or they can stand on either edge of the platform as the slam lands on the middle of the platform. In Simple Mode, he has a longer delay for his attack.

After taking enough damage, he will cry in pain and lower himself back inside the train, and the player(s) move(s) on to the next part of the train. Hitpoints = 320/325/325

"Sorry! This train is only for the dead...but we can help you with that."
—Lollipop Ghouls, Death Screen

In this phase, the Lollipop Ghouls will come out on the edges of the screen. They are fought simultaneously, but both must be killed separately. Hitpoints = 180/200/200

Their only attack is each raining down lightning from their mouth and moving closer to players until to the edge of the platform on either side. In Simple mode, they move slower when attacking. In Expert mode, they move faster.

Instead of Pumpkimps, Spooks come out of the smokestacks of the middle car and home onto players. When they are killed, a pink skull will drop that is able to move the cart, which can be parried. In Simple mode, the spooks' spawning rate is slower. In Expert mode, the spawning rate is faster. Hitpoints = 5/5/5

After enough damage, they will melt, and the player(s) can move on to the front of the train. In Simple mode, the battle will simply end when they have been slain. Total Hitpoints = 360/400/400

"What a glorious night for me to bring the fright!"
—Head of the Train, Death Screen

In this last phase, the head of the train dislodges from his cab and the rest of the train to gallop after the players off the rails, constantly moving from left to right. In Expert mode, the Head of the Train gallops faster, and the Pumpkimps will return, dropping ingots on the cart. Occasionally, rings of bones shot out from his nose will move across the screen if parallel to the players.

To damage him, players must attack his core, which is protected by an invincible grate. It must be opened by parrying the tail (which won't count towards the parry total), and after a little while, the grate will slam shut.

Once the heart has taken enough damage, the locomotive flails and cries as he slides on the ground. Hitpoints = 200/200 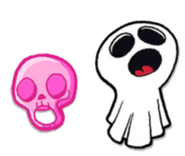 A Spook and its skull

A Pumpkimp and its ingot 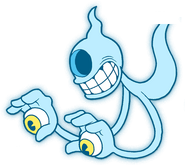 The Head of the Train 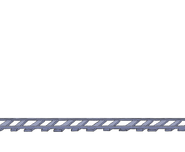 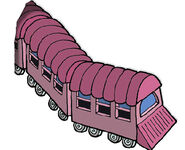 Head of the Train concept art