One Hell Of A Time

One Hell Of A Time

One Hell Of A Time is the final level in Cuphead, where the players must face off against The Devil. When entering the level, the player will be presented with a cutscene, and the fight commences when they refuse the Devil's demands.

The location of One Hell Of A Time is in the chess piece-shaped building next to the casino in Inkwell Hell.

In this phase, his attacks are the summoning projectiles with his pitchfork and his many animal transformations.

He will use his trident to summon three different types of projectiles. One of the projectiles can be parried:

He will transform into a certain creature with it's own attack.

A purple demon will appear behind the Devil's throne and judge by where he is going to move on where he is. They can simply be disposed of by shooting them. Hitpoints = 4.5/5

The Devil will extend his mouth and his skeleton jumps out of his skin. Then a hole appears with the word "GO!" with closing fire walls. When you jump down the hole, Phase 2 begins. Throughout this phase, flaming poker chips will fall on the platforms. He can use two attack in the first part:

After damaging him enough, the Devil will become frustrated and the second part of the fight can commence. The Devil will no longer fight the player(s) directly - he will instead send his minions to attack:

After damaging him enough, the devil will start crying and the third part commence: 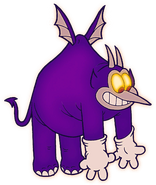