Ollie Bulb is a boss that appears as the second phase of the Root Pack in Botanic Panic!.

Ollie Bulb is a large anthropomorphic onion with blushing cheeks and a round purple nose.

Ollie Bulb is the more bashful follower of the Root Pack; a a well-meaning, bashful tagalong who's a little in over his head.[1] He is shown to be quite emotional, as seen when he cries uncontrollably while fighting Cuphead and Mugman - he is either really scared, or just really upset. He might not even be trying to hurt the brothers at all, considering that he only cries, but doesn't try to attack them. He is also the only boss besides Grim Matchstick that does not outright mock the duo or talk about their own strengths or egos in a game over. In Cuphead in Carnival Chaos, he is the neighborhood grocer.

After Sal Spudder is defeated, Ollie will rise out of the soil in the middle of the area and shakes the dirt off from his nose. Upon looking around the area with a worried expression, he will begin to wail.

Unlike Chauncey Chantenay, players can inadvertently be damaged if they touch him. Ollie Bulb's only attack is to cry out water streams on both sides, which rain down tears randomly across the area. Some of those tears can be parried. In Expert mode, the tears drop quicker and there will be more falling down each time he cries. In Simple mode, Ollie Bulb doesn't appear in the fight.

Upon defeated, Ollie will constantly start pushing his cheeks with both hands with several strips of his onion skin peeled down while sinking to the ground.

In the version 1.2.0, if the player avoids firing at Ollie Bulb upon his arrival, Ollie will look around in fear before realizing the players mean no harm, burrowing away while smiling at the player. This action will cause Horace Radiche to emerge in his place in Chauncey Chantenay's phase. Sparing Ollie Bulb will also cause the Progress Bar (if you die) to have a question mark in the center. 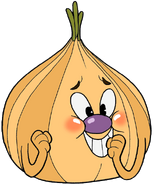 Ollie as he appears. 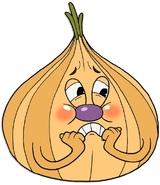 Ollie Bulb about to cry. 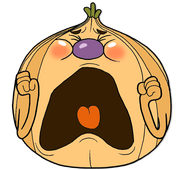 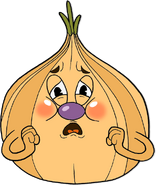 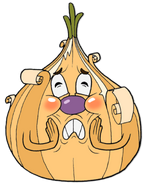 Sprite of a happy Ollie Bulb. 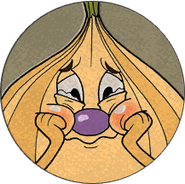 Ollie's icon in the game over screen.
Add a photo to this gallery

Retrieved from "https://cuphead.fandom.com/wiki/Ollie_Bulb?oldid=56966"
Community content is available under CC-BY-SA unless otherwise noted.