Murine Corps is a level in Inkwell Isle Three that opens either after beating Sally Stageplay or by completing Rugged Ridge. Either way, a new route opens up leading to a neighborhood area where you'll find the level Murine Corps.

Murine Corps is the boss battle starring Werner Werman and should be the third or second to last boss you'll fight in Inkwell Isle Three leading to Inkwell Hell. The level is set inside a house, but to be more specific, a mouse hole. This fight has three phases, with the first two being you fighting Werner Werman, then the last phase is where you fight a giant cat. 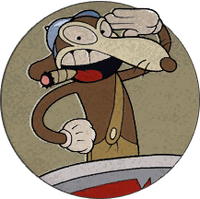 The player is greeted by Werner Werman using a mechanical hand to light his cigar. He then goes inside his can and the scuffle commences.

Werner Werman will use one of two attacks:

He also has a chance to launch two parriable platforms that can be parried so you can avoid Werner charging over to the other side. When Werner Werman's first stage is defeated, he is shown attempting to use a mechanical arm to launch a bottle-rocket at you, but fails, instead destroying the outer layer of his tank, revealing two flamethrowers at the bottom. 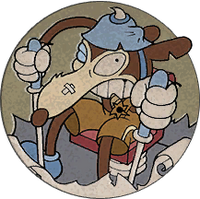 Upon Stage 2's activation, a second platform and bottlecaps attached to harmless wooden poles will appear. Werner will now fire his flamers at either the top or bottom level, according to which level his tank is adjusted at. On Regular or Expert, the bottlecaps to the side spin to signal that they are going frontwards, and will either do so with one, two or all 6 bottlecaps on a single platform. On Simple, Werner's tank will only move to the sides while his bottlecaps remain docile, but harmful.

On Regular or Expert, once he has sustained too much damage, his soup can will malfunction as he attempts to pull the levers and the cat that has been stalking him throughout the fight eats him. In Simple Mode, a knockout is declared and Werner will constantly pull the levers while his tank moves vertically rapidly as if it were broken. 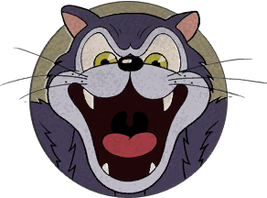 Upon Stage 3, the second platform will be destroyed by the cat's head. The cat will attack you in two ways:

Once a knockout is declared, the cat's face will fall off, revealing a cockpit with an injured Werner Werman at the controls.

Retrieved from "https://cuphead.fandom.com/wiki/Murine_Corps?oldid=51157"
Community content is available under CC-BY-SA unless otherwise noted.