View source
watch 01:02
Who is Mugman?
Do you like this video?
Play Sound

He is voiced by Frank Todaro in The Cuphead Show!

Mugman is very similar in overall appearance to his twin older brother Cuphead, with his head reminiscing a mug and his body being almost identical to his sibling: wearing a black, long-sleeve shirt, yellow gloves, a pair of shorts and brown shoes.

If the player chooses "Yes" in the Devil's cutscene - triggering the bad ending - Mugman's nose, pants and the stripes on his straw turn indigo, his handle is broken and he gains yellow eyes with red pupils and black irises. He also loses some teeth. He has fire coming out of his head in other artworks and has sharp teeth like his brother.

In The Cuphead Show!, Mugman's appearance remains the same, save for a few differences. Like Cuphead, his colors are a bit duller, now wears yellow gloves all the time, and his skin has a beige tint to it, along with his shoes having an orange tint. He also has thin eyebrows.

Mugman is a joyful person who cares for his older twin brother Cuphead very much. He is more cautious than his brother and is a bit of a worrier. While he secretly loves the adventures Cuphead drags him into, he often frets about the collateral damage they might cause. He has a somewhat dorky nature and tends to over-prepare for a battle rather than jumping right in.

Mugman is fun-loving like Cuphead, but is shown to be careful and less rash compared to his brother, and acts as the voice of reason for him. This is shown when he begs Cuphead to not make the deal with The Devil, as that would end up costing them their souls in the introduction.

In The Cuphead Show!, Mugman is pretty much the same, but more in touch with his feminine side. While he cares for Cuphead, the two of them bicker half the time. He also has a personality that's part "lovable coward", part "cowardly lion", since, although being a timid person, he saves Cuphead from damnation in the pulling his brother's soul out of the Soul Ball machine and restoring it to his body, and has so far defeated the Devil three times. In Sweater Off Dead, while Cuphead is secretly panicking about the Devil taking his soul, Mugman is the one who decides to take decisive action and takes him to Quadratus.

In Inkwell Isle, Mugman lived a joyful and easygoing life alongside his older brother, Cuphead. One day, the boys wandered far from home and ended up in the Devil's Casino despite the warnings of their caretaker, the Elder Kettle.

In the casino, Mugman and Cuphead worked together to gain a winning streak at the Craps table that surprised even King Dice himself. When the Devil approached, he offered the duo a bet: If the boys won, they get all the loot in the casino, but if they lose, the Devil will take their souls.

Mugman tried to stop his brother from rolling the dice, as he knew that gambling with The Devil wasn't a good idea. Unfortunately, his attempts were futile, as Cuphead had taken the bet and lost. The duo begged for The Devil to spare their lives, and was thus sent on a mission to collect his debtors' soul contracts by tomorrow at midnight in order to keep their own souls. Cuphead and Mugman fearfully ran back home to the Elder Kettle, who gave them a potion that gave them powerful abilities and told them to go along with what The Devil says for now.

After doing the tutorial, Cuphead and Mugman proceed to collect the soul contracts, battling bosses, playing through levels, and saving the Legendary Chalice. When they travel from Inkwell Isle One to Inkwell Isle Two, the Elder Kettle tells the boys that their strength is growing thanks to those soul contracts, and soon it will be enough to defeat King Dice in the battle and even the Devil.

Eventually, with all of the soul contracts in their possession, the boys run into King Dice, who is determined to kill them due to losing a bet. After King Dice is defeated, Cuphead and Mugman then meet up with the Devil, who was awaiting them in his office. What the pair does next depends on the choice that the players decide. If they give the Devil the soul contracts, Cuphead and Mugman become his personal lackeys and are turned into demonic cups, creating the "bad" ending. If they do not give him the soul contracts, the Devil will be outraged and battle them.

When the Devil is defeated, the boys accept his surrender and burn all of the soul contracts, releasing the residents from their eternal servitude to the Devil. The boys then went home and told the residents that they are now free from their debt. They are praised for their bravery and an all-day celebration was thrown as thanks. The boys promised to never get into trouble again and succeeded until the next time.

Finger Bullets - Mugman can create energy bullets by constantly snapping his fingers. He can also charge them up to preform an EX attack, which is usually a much larger bullet that hits multiple times. The type of bullets depend on what potion you buy:

Dashing - Mugman can dash a short distance in both mid-air and on the ground. With the Smoke Bomb ability, he can "teleport" while dashing and not take any damage.

Parry Slap - While in mid-air or flying his plane, Mugman can attack pink objects by turning his straw into a hand and slapping it, whether it be enemies, projectiles, or objects. Parry Sugar will allow Mugman to automatically parry whatever he jumps towards. This helps fill up the Super Meter, needed to perform a Super Art.

Resurrection - When Mugman dies, he can be resurrected when his heart, which is in the center of his soul, is parried. As long as Cuphead is with him and his soul is still on screen, he can return to the fight.

Flight - While Mugman cannot exactly fly himself, he is a master pilot and comes equipped with his own blue fighter plane, complete with bullets.

Energy Beam - The energy beam is the first Super Art to unlock. Using the liquid from his head, Mugman spills it as a horizontal beam that damages enemies.

Invincibility - As the second Super Art, Mugman crosses the astral plane by transforming into a large, eyeless version of his head that spits out a gold, sparkling, complete version of himself. This makes Mugman invincible for a few seconds before returning to his normal state.

Giant Ghost - As the final Super Art, Mugman sends his spirit out of his body. Unlike Mugman's spirit when he dies, his spirit is now larger and muscular. The direction the ghost goes depends on how Mugman is moving (i.e. if Mugman moves left, the ghost goes left). The ghost damages any enemies he is near. He does this for approximately 10 seconds before he disappears except for his heart, which goes slowly goes up. His heart can also be parried.

Astral Projection - With the last two Super Arts involve him going into the astral plane, it can be implied that Mugman has the special ability to enter the astral plane and have out of body experiences. 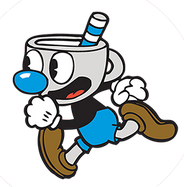 Mugman shooting both upward and forward

Mugman in his plane

Mugman when frozen by Cala Maria

Mugman drinking his liquid from his head 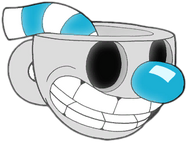 The Ghost of Mugman

Mugman celebrating after completing a level

Mugman receiving a Super Art from The Legendary Chalice 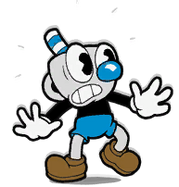 Mugman in the Devil fight intro 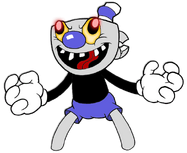 Mugman's appearance in the bad ending 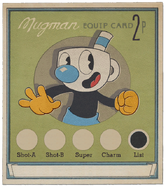 Cuphead and Mugman when starting the game, final version

Cuphead and Mugman when starting the game, 2016 demo

The 7th page on the intro

The 10th page on the intro

Cuphead and Mugman set off for home in a good ending 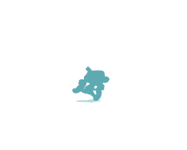 Mugman as seen on the death cards

Mugman with Cuphead as seen in the launch trailer

Mugman as seen in the announcement trailer 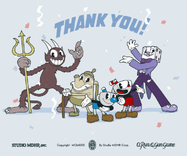 Mugman dancing in the DLC trailer

Mugman with Cuphead, Ms. Chalice and Chef Saltbaker in the DLC trailer

Artwork for the DLC announcement

Mugman in the official music sheet available for purchase advertisement

Mugman in the first TheMexicanRunner advertisement

Mugman in the second TheMexicanRunner advertisement

Mugman in the Cuphead Soundtrack advertisement

Mugman in a Xbox One and Steam advertisement

Mugman in a Red Bull advertisement

Mugman and Cuphead trying to blow out the candle in the Cuphead Turns One! image 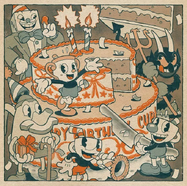 Mugman in the second anniversary image

A papercraft of Mugman's bad ending appearance in the A treat for all Hallow's Eve!! advertisement

Mugman's bad ending appearance in the Trick or Treat !! advertisement

Mugman in the Don't Miss It !! Save 20% advertisement 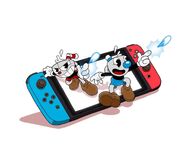 Cuphead and Mugman on the Nintendo Switch 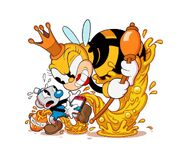 Mugman in the first year anniversary of Cuphead's Switch release 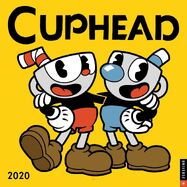 Mugman in the cover of the Cuphead 2020 Wall Calendar

Mugman in the 2020 Christmas artwork 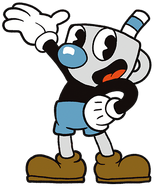 Animation of Mugman during final results

mugman in the cuphead show 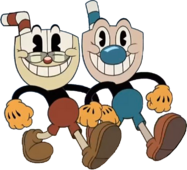 Cuphead and Mugman as they appear in The Cuphead Show!.