Muffsky Chernikov is one of the minor bosses confronted in the Sugarland Shimmy level of Inkwell Isle Two. He is one of the several subjects randomly selected by the level's main boss Baroness Von Bon Bon.

He is a anthropomorphic frosted cupcake with a malicious expression. He has limbs that wore white gloves and brown shoes, and sports a green wrapper, a red nose, and a red cherry on the top of his head.

Based on his death quote, he seems to have a penchant for talking in rhyme.

Upon randomly summoned for the first phase before fighting Baroness Von Bon Bon herself, Muffsky will jump around the arena and tries to squash the player(s). If that fails, two frosting shock waves from his landing will damage the player(s) when they spread outward three times. In Expert mode, instead of waiting for the shock waves to dissipate, he will jump before they are gone, when the third splash appears specifically. Muffsky doesn't appear in Simple mode.

When defeated, his cherry stem will gain eyes, begin to whittle down like a lit fuse, turning into a cherry bomb, exploding with Muffsky. Muffsky will also melt down to just a wrapper and frosting.

Muffsky Chernikov landing from a jump. 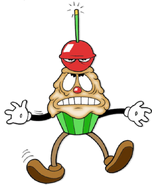 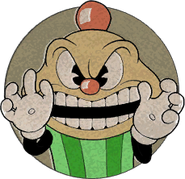 Muffsky Chernikov in the game over screen.
Add a photo to this gallery
Retrieved from "https://cuphead.fandom.com/wiki/Muffsky_Chernikov?oldid=57107"
Community content is available under CC-BY-SA unless otherwise noted.