Mr. Chimes  is a mini boss that appears in the boss fight for King Dice when landing on Space 9. His stage is set inside a claw machine with the airplane.

Mr. Chimes is a cymbal-banging monkey toy with empty eye sockets. He wears a white hat with a red stripe on it, a turquoise sleeveless shirt, and red and white striped shorts. He also has cymbals strapped onto his hands.

Before his battle begins, Mr. Chimes is seen with a claw lowering him. He then makes a funny face at the player and then go back to his inactive state.

Mr. Chimes' battle has a unique aspect to it: the player must play a small game of Memory at the same time. The monkey will be inactive and carried around through out the battle until the players find a pair by parrying the cards to flip up:

There are total of 12 cards, with 6 pairs which counts up to 6 rounds to attack Mr. Chimes. After taking enough damage, he reverts back to his inactive state.

When defeated, Mr. Chimes will slam his head between his cymbals. Hitpoints = 800/1000 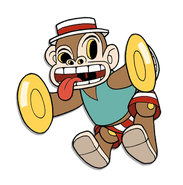 Mr. Chimes including the full length of the claw machine string 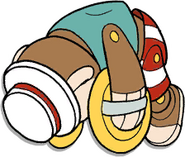 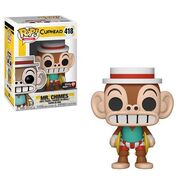 There is an asset that will travel between the cards and titled soulidle or bot, it has been scrapped early on as the art didn't past through the concept stage, they would spawn one at a time and keep coming out throughout the fight. It would only appear in Expert Mode. Hitpoints = 8