Cuphead Wiki
Register
Don't have an account?
Sign In
Advertisement
in: Characters, Bosses, The Delicious Last Course,
and 2 more

Mortimer Freeze is one of the new bosses featured in The Delicious Last Course. He is fought during Snow Cult Scuffle, and his battle takes place in an ice palace, although damaging him enough shifts his fight to above his ice palace. He is the keeper of the Icy Sugar Cubes.

Mortimer Freeze is a plump old man with pale blue skin that looks frozen and an icy beard and eyebrows that looks a bit melted, has a long, pointy nose, and large ears. He wears a purple wizard hat with a band. His robe is also purple and looks ragged with patches on the arms, it is held up by yellow buttons. His pants are lavender also with some patches and he has yellow shoes.

The Snow Monster is snowman with a rather round body shape, with three yellow buttons on its belly. It seems to have a beard and the inside its mouth (which resembles a cage) and its eyes are hollow. It wears an orange bucket as a hat and wears broken handcuffs on their wrists.

In his final form, Mortimer Freeze is a large flat snowflake (albeit eight-sided) made of ice with two glowing eyes, a pointy nose, and a large mouth. He can turn his points into either an arm or a hand crank.

He is a cult leader where the cult members may be his audience. He seems rather jolly most of the time even in his other forms. He also seems to be a bit of a nepotist as evident by one of his death screen quotes. As evident by his tarot card attack, he is implied to be a deceiver who recruits others into his cult with the promise of happiness. He is also shown to be a charismatic leader as evident by the audience watching the fight.

Mortimer Freeze is first seen sitting on his throne before he flies under an arc into the arena. His hat gets knocked off when he flies through the ice gate, so he swoops down and ice skates his way to grab his hat before he extends his legs up, puts his hat on, and flies up.

"It'll be a hot December before I let you be a member."
—Mortimer Freeze, Phase 1 Death Screen

As the battle commences, Mortimer will use three attacks at random:

For the entirety of this phase, he constantly moves side to side while airborne, requiring the player to shoot upwards. After taking enough hits, Mortimer eventually stops, pulls out his bell and rings it to lower the snow monster on him. The snow monster's stomach closes in on Mortimer, possibly to fuse the two together, as it breaks free of its chains to drop down into the arena. This causes all the remaining icicles to be flung to the foreground. Hitpoints = 230/248/278

In this phase, Mortimer will operate a Snow Monster and uses three moves:

In Simple Mode, Mortimer will immediately turn into a refrigerator. It can shoot out the small ice cubes that do not break apart and occasionally shoot out the medium or large ones. He continues to attack this way until this sub-phase ends and releases popsicles as usual. Hitpoints = 580 In the second sub-phase, Mortimer will only use his rolling and bouncing attacks. Hitpoints = 540

After taking enough damage, the Snow Monster holds his stomach, becomes bloated, and forms something inside that stretches him into something with 8 points. His top half bursts apart, releasing Mortimer in his final form. As five platforms form for the player to head towards the next phase, the bottom half runs across the screen to encourage the player to jump up. The Snow Monster's bucket can be seen falling from the top. In Simple Mode, the fight simply ends with the Snow Monster holding his stomach and shivering. Hitpoints = 693/777

During the phase, the battlefield completely changes into five platforms revolve around the center as the player climbs up to them. In Expert Mode, they revolve around faster. Mortimer, who is transformed as an 8-point snowflake, falls like one in the background, licks his fingers as if he is sharpening them, and proceeds to fight. Interestingly, his snowflake form does not have a hurtbox and the player can be on top of him.

During this phase, Mortimer Freeze is capable of moving to the other side of the battlefield through the background, foreground and sometimes flipping himself over, which changes how most of his attacks come out. He has three attacks:

After taking enough damage, the snowflake form melts, revealing a shivering and defeated Mortimer. Mortimer has a thermometer in his mouth and a water bag on his head and is sitting on his hat. If he is flipped over, he will turn right side up before melting. Hitpoints = 709/795

Mortimer slams his Winter Whale into the ground

The Snow Monster slamming the ground 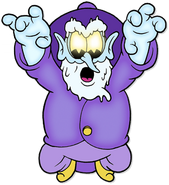 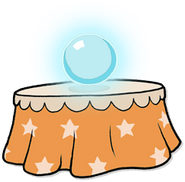 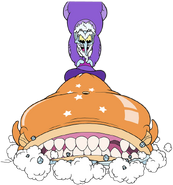 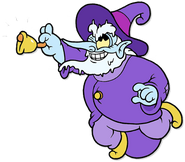 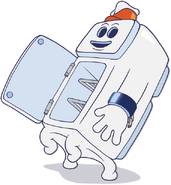 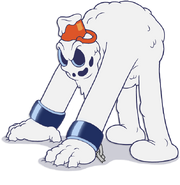 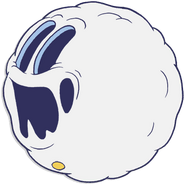 Snow Monster slamming both of his fists down 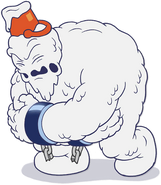 Snowflake sharpens his hands to prepare for the fight

Snowflake open his mouth as an ice cream stand 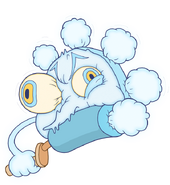 Snowflake launches one of his eyes.

Snowflake eating his eye back

Snowflake opens up a hatch 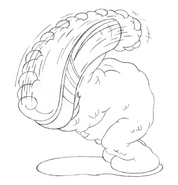 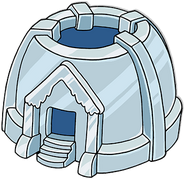 Mortimer (top left) at the end of the credits