"Fault, scratch and choke -- are you trying to hustle me?"
—Mangosteen, Death Screen

Mangosteen is a floating 8-ball that appears in the boss fight with King Dice when landing on Space 8.

He has two rows of teeth acting as a mouth and two eyeballs situated at each end of the mouth.

Mangosteen seems to be quick to jump to conclusions, possibly sometimes not realizing that said conclusions he makes are false, considering his accusation of how Cuphead and Mugman tried to "hustle" him (as shown in his death screen), when in fact they just want him out of the way. He also appears to have a weak stomach (if he even has one), as evidenced by his vomiting, when he is defeated.

Before the battle starts, Mangosteen is basically a faceless 8-ball, but then his eyes and teeth slide over to become a face.

The boss has only one known attack, which is shooting color spectrum orbs from his mouth that aim at the player's position, which can be easily avoided. Mangosteen is also accompanied by billiard chalks, dropping from the sky in an attempt to crush the player(s). The chalks will try again by jumping in an arc and slamming down on them, the green one jumps the highest, then violet, and the lowest is orange, but this is also easy to avoid. Usually there will only be two different color chalks on screen. In Expert mode, however, all three color chalks can be on screen at the same time.

After enough damage, Mangosteen's body will start melting and a black substance will spill out from his mouth, making him appear to be vomiting. 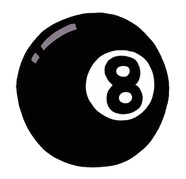 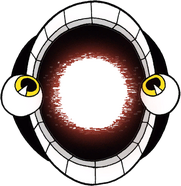 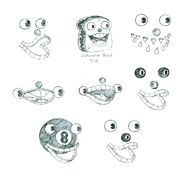 Concept art (with the inspiration on top right)
Add a photo to this gallery
Retrieved from "https://cuphead.fandom.com/wiki/Mangosteen?oldid=59393"
Community content is available under CC-BY-SA unless otherwise noted.