Lord Gob Packer, the Jawbreaker, is one of the minor bosses fought in Sugarland Shimmy level of Inkwell Isle Two. He is a subject randomly summoned by the level's main boss Baroness Von Bon Bon.

He is a large gobstopper or jawbreaker with the red-colored outside shell used as one of the color layers in his so-called "mouth", with multiple inside layers colored in yellow, white, blue, and again white respectively. His center ball is green with eyes.

Nothing much is known about his attitude in general. Lord Gob Packer's death screen suggests that he seems to like wisecracking at his rivals.

He will be selected randomly by Baroness Von Bon Bon for the first phase during the battle. Upon being summoned, he will fly towards wherever the player(s) are heading, and deals damage in contact. He also has a minion that follows him and attacks the player, and the current position of player will soon get deadly. In Simple mode, there are no minions following him. In Expert mode, there will be two.

When defeated, his layers will start breaking one by one with the green core layer gaining a halo and then float away, the following ones will simply break apart, one by one, and a vibraphone jingle is heard playing. 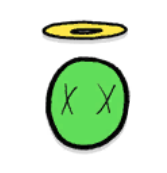 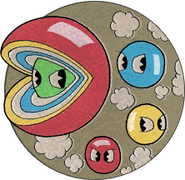 Lord Gob Packer in the game over screen.
Add a photo to this gallery
Retrieved from "https://cuphead.fandom.com/wiki/Lord_Gob_Packer?oldid=55552"
Community content is available under CC-BY-SA unless otherwise noted.