"Sorry! This train is only for the dead...but we can help you with that."
—Lollipop Ghouls, Death screen

The Lollipop Ghouls[1] are the third phase of the Phantom Express in Railroad Wrath.

The Lollipop Ghouls appear to be maroon pistons with yellow eyes and dark magenta eyebrows.

Not much is known about the Lollipop Ghouls, but it is shown that neither one is even slightly concerned after their brother is defeated, suggesting that, much like Wally Warbles, they are determined enough to fight to the bitter end, without a care in the slightest about what happens to them.

After T-Bone is defeated, the Lollipop Ghouls will pop up from the train cars while laughing in an evil manner.

The Lollipop Ghouls' only form of attack is to rain lightning on the players, forcing them to move to the left or the right depending on which brother is attacking. More specifically, the cart needs to move all the way to the other side and, even with that, the players need to be near the edge of the screen to avoid this attack. They give some time to react to the incoming attack, but not a whole lot. In Simple mode, the Lollipop Ghouls move slower when attacking. In Expert mode, they move faster. All the while, spooks will fly out of the middle train car. When destroyed, they drop a pink skull that can make the cart the player is standing on move. In Simple mode, the spooks' spawning rate is slower. In Expert mode, the spawning rate is faster. Hitpoints = 5/5/5 (The death animation of the Lollipop Ghouls is their face melting)

A Lollipop Ghoul about to attack 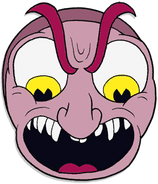 A Lollipop Ghoul attacking
Add a photo to this gallery

The faces of the Lollipop Ghouls were heavily inspired by ghostly heads from the 1930 cartoon Swing You Sinners!.[1]


Cite error: <ref> tags exist, but no <references/> tag was found
Retrieved from "https://cuphead.fandom.com/wiki/Lollipop_Ghouls?oldid=56928"
Community content is available under CC-BY-SA unless otherwise noted.