In the base game, the bosses take place in the form of debtors, whose souls Cuphead and Mugman must steal to win The Devil's bet, and in The Delicious Last Course, the keepers of ingredients that are used to create the Wondertart to bring Ms. Chalice back to life.

Bosses can have as few as only one phase (such as the minibosses fought in All Bets Are Off! and some bosses played on Simple Mode) or as many as five (Djimmi the Great) but most of the bosses have three phases.

Whenever the player starts a boss battle, the announcer utters one of the following lines:

Followed by one of the following, accompanied by "WALLOP!", or "EN GARDE!" for the King's Leap Bosses.

Once the boss is defeated, the announcer will shout "Knockout!", which is followed by the bosses' defeat pose.

However, if the player dies, they will be greeted with a screen that simply says "YOU DIED!" which precedes a "Death Card" which contains a quote of the boss mocking the player, often in rhyme.

There are a total of 28 bosses in the base game. There are five bosses each in Inkwell Isles 1 and 2, seven in Isle 3, ten in the showdown with King Dice (nine mini-bosses plus King Dice), and finally, The Devil himself.

In the Delicious Last Course, there are seven bosses in Inkwell Isle 4, along with five King's Leap bosses, thus adding a total of twelve new bosses. Added to the total of the 28 bosses from the main game, there are a total of 40 bosses in the entire game (footage of each below). 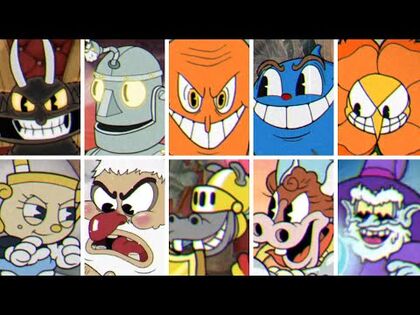