The Dice On The Board

King Dice is the right-hand man of the Devil and the secondary antagonist of Cuphead. He also serves as a gatekeeper between overworlds, only allowing Cuphead and Mugman to pass when they visit his Die House and turn in every contract to him.

King Dice is fought in the stage All Bets Are Off! Instead of fighting him right away, a minimum of three mini-bosses must be defeated to battle King Dice himself.

King Dice is a six foot tall humanoid being with a dice for a head, with each side of his head showing the number of pips that would be on a die, with the "One" side acting as his face (the dot being his nose). He wears white gloves, purple shoes and tailcoat, a lavender waistcoat, and dark purple pants and bow tie. He also has a mustache, purple eyelids, and seafoam green eyes that are only shown whenever he acts seriously in a wicked manner. His head floats due to not having a neck.

King Dice is an extremely sleazy, deceitful, untrustworthy, and manipulative individual. While normally relaxed and cheerful in a sadistic way, he can be as cruel as his master if he wants to be. He also tends to speak using stereotypical New York Gangster slang, saying phrases such as "Scram", or "Big cheese".

Very arrogant and overconfident in himself, King Dice believes that no one is allowed to mess with him and that he can easily triumph over anyone who tries to, which ultimately leads to his defeat. However, it seems like King Dice does have a heart, as shown when he congratulates Cuphead and Mugman every time they are let through to the next isle, and during the cutscene in the beginning of the game, where it is shown that he is proud of them for not being able to lose.

King Dice also takes his own bets very seriously, going as far as to attempt to kill the brothers when they succeed in getting all of the soul contracts after he made a bet that they would fail their mission, though given who his boss is, the stakes were likely to be extremely high for him.

For an unknown amount of time, King Dice has served as the immoral manager of the Devil's casino. He first appears when Cuphead and Mugman are on a gambling streak at Craps, commenting that they seemingly can't lose. He then bows and smirks as the Devil enters the scene and offers a bet on their souls. After the brothers are put into debt, King Dice is sent to make sure they complete the deal by blocking the passage to the other areas of Inkwell Isle.

After Cuphead and Mugman collect the final contracts, King Dice confronts them at the Devil's Casino. Initially complimenting them for successfully completing their task, he then angrily states that their success has caused him to lose a bet, and that they are going to play a "game" before seeing the Devil. King Dice is nowhere to be seen after his defeat.

"Hold it right there, wheat! You ain't leaving 'til you put the screw to them debtors...all of 'em! Ya get me? Good. Now scram!"

"Well, lookee here! You actually pulled it off...but you made me lose a bet!! And for that, you ain't seein' the big cheese just yet. We're gonna play a little game first!"

Before the battle, King Dice pops up from behind the board game whilst laughing sinisterly, and his head briefly flies off the screen before falling back into place. Everytime the players come back after finishing a mini-boss battle, King Dice does his intro again, but without the laughter.

In order to fight King Dice, the player must play and finish the board game provided by King Dice himself by parrying the dice summoned by his clap with 1, 2 and 3 numbered on it. There are 15 spaces in total, counting the START, START OVER, SAFE and FIN spaces:

When reaching the finish line, the main battle commences with King Dice closing in on the player. He only has one known attack. By using his hand, which moves like a person, he sends out a row of cards (12 to be exact, with 4 cards (specifically the hearts) that can be parried) which march towards the player while he laughs evilly.

Once he has taken enough damage, King Dice is defeated. In his knockout animation, he suddenly appears terribly beaten with his tuxedo damaged, his head cracked and chipped, and both of his gloves begging in defeat.

I'm Mr. King Dice, I'm the gamest in the land.
I never play nice, I'm the Devil's right hand man!
I can't let you pass, 'cause you ain't done everything.
Bring me those contracts, c'mon, bring 'em to the King!
If you haven't finished your task, haven't worked assiduously,
No, I cannot let you pass, don't you mess with me!

King Dice's response to the player defeating a boss on the Simple difficulty.

King Dice blocking the way inside the Die House.

King Dice shifting into the ground.

King Dice and the Devil having a chat.

King Dice starting to get suspicious about Cuphead and Mugman.

King Dice stopping the player if they haven't collected all of the soul contracts.

King Dice gets in Cuphead's face and commands him to leave the casino and not return until the contracts are collected. 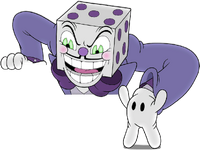 All Bets Are Off sprite 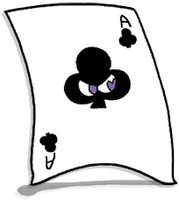 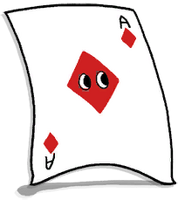 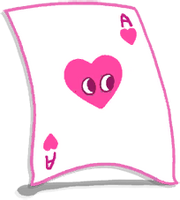 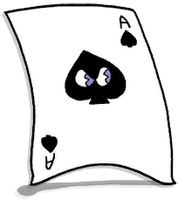 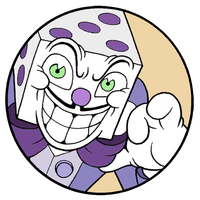 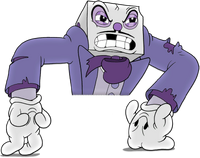 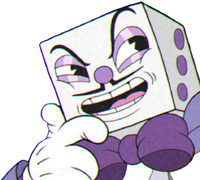 Animation process of King Dice’s full body, along with his clap. 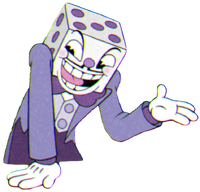 King Dice talking to the Devil. 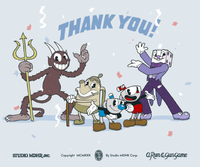 King Dice animated in-game.
Add a photo to this gallery

Retrieved from "https://cuphead.fandom.com/wiki/King_Dice?oldid=54719"
Community content is available under CC-BY-SA unless otherwise noted.