"For me, a sweet tooth is fiendishly uncouth!"
—Kernel Von Pop, Death Screen

Kernel Von Pop is one of the subjects summoned by the boss Baroness Von Bon Bon, and one of the minor bosses fought in the Sugarland Shimmy level from Inkwell Isle Two.

Kernel Von Pop possess a much snooty and arrogant attitude, suggested in his death screen.

He flies around the arena in a horizontal figure 8, randomly choosing to go straight ahead or travel vertically in the middle, and summons smaller and inverted clones of himself that fly upwards. In Simple mode, the smaller versions of himself won't be summoned. In Expert mode, they are summoned at a faster rate. Hitpoints = 10/10

When defeated, he floats up with his mouth (even the top of his head) separated akin to the same animation as the smaller candy corns. 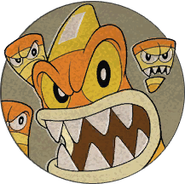 Kernel Von Pop in the game over screen.

The mini candy-corn.
Add a photo to this gallery
Retrieved from "https://cuphead.fandom.com/wiki/Kernel_Von_Pop?oldid=55557"
Community content is available under CC-BY-SA unless otherwise noted.