Jelly the Octopus is an unused boss who would have been one of the bosses for The Airship stages.

He is a yellow octopus with cyan, triangular eyebrows and white and lavender tentacles with cyan blobs between each tentacles. He has a yellow antenna with a pink tip which can turn cyan when parried.

Jelly simply idles while looking at the player, before moving around. He can only be damaged by having his antenna parried; once it is parried, he will speed up a bit.

The King's Leap utilizes the parry mechanic to defeat the minibosses. 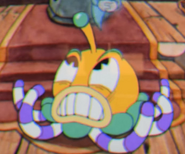 Jelly after parrying his antenna 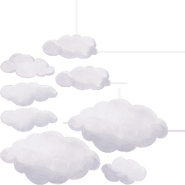 The entrance to the level Jelly would have been in, as seen in old gameplay footage.