Hopus Pocus is a mini boss that appears in the boss fight for King Dice when landing on Space 5, in the All Bets Are Off! level of Inkwell Hell.

Hopus is a white rabbit dressed in a blue tuxedo and wearing a red bowtie and white gloves. He has large yellow eyes with blue irises. He hides in a top hat and wields a magic wand.

Hopus Pocus' personality is that of a stereotypical stage magician, although he also seems to have a crafty, maniacal, manipulative, and sadistic side, which is shown by his crazed grin and giggling.

Hopus Pocus enters the fight by being pulled out of a top hat by King Dice, as children are heard cheering briefly. Hopus has two known attacks:

During the fight, a card is displayed in the middle of the screen, acting as a platform. Unlike Bon Bon's candy wrapper which moves during the fight, this platform doesn't move at all. This platform is also the only option to evade Hopus Pocus' rabbit skull attack, since the player can see the opening, if not having the smoke bomb equipped.

When Hopus is defeated, he will be strangled by his own bowtie.

Hopus Pocus about to attack. 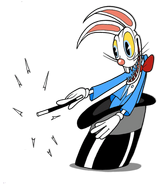 Pencil test of Hopus Pocus' idle.
Add a photo to this gallery
Retrieved from "https://cuphead.fandom.com/wiki/Hopus_Pocus?oldid=56227"
Community content is available under CC-BY-SA unless otherwise noted.