6 (including her normal form)

Hilda Berg can be fought after you find the blueprint for an Airplane, which will unlock the level Threatenin' Zeppelin. She is the first shoot-em'-up boss in the game.

Hilda Berg bares a rather stylized design to her physical appearance in contrast to a few of the other females in the game.

She is a moderately tall, slender figure appearing as a blimp-like, humanoid-zeppelin hybrid. She has pinkish, fair-colored skin and very short, maroon/ebony-colored hair in a finger-wave haircut with a prominent hair-line in the center. Her facial structure consists of a long, pointed nose, thin, black eyebrows, and salmon eyelids.

Hilda's wardrobe is generally simple, with a zeppelin touch. She wears a cherry-red shirt with a darker-red lower half, and crimson, puffy sleeves, as well as a salmon skirt and matching ballet flats.

On the top of her head, Hilda wears a tan-colored weather vane with gold accents. She also wears simple, white opera-gloves and glowing gold bracelets.

As a true blimp/zeppelin, her body becomes the blimp's body with the same color scheme as her dress; cherry-red and darker red and the main body, and crimson on the fins, while retaining her salmon skirt and shoes. She now has a propeller on the back and a unicycle under her body, consisting of a tan handle, grayish violet pedals, and a white tire with a single, yellowish patch.

In her constellation phases, Gemini, Taurus, and Sagittarius all have visible skin similar to her default form, but with bodies made of clouds, gold accents on their accessories, and stars for pupils in their eyes. The Gemini twins resemble female humanoid sirens sporting bikinis, Taurus resembles a general bull with a large nose ring, and Sagittarius resembles a masculine centaur with a golden, luminescent tail.

Hilda's third and final phase form is by far the most terrifying. She takes on the form of an enormous crescent (waning/waxing crescent) moon with her face, strikingly similar to versions of the moon depicted as having a face in certain popular culture.

The moon itself is entirely the same red color as her dress from her default form with several craters on parts of it and the upper curve being longer than the lower curve, while possessing the same curls as her hair on the area of her forehead.

In this form, Hilda's face is significantly more detailed, almost resembling that of a stereotypical witch. Her eyes have visible, thick, black eyelash lines and matching eyelashes, and the now-visible irises are shown to be two different colors; yellow on the outside and red on the inside. Her nose is longer and noticeably curved in a zig-zag-like fashion and visible markings can be seen on her nose and face.

Whenever she pops her face out to unleash her UFOs, several golden, steampunk-esque gears are visible, indulging the one attaching her face to the moon itself.

Hilda Berg is said to have a mischievous personality.[1] She seems fairly rude when it comes to pestering her enemies, as indicated by how she teases the brothers on how far they will get to actually beat her on the second phase death screen and will even call them a wimp as seen in her death message on the first phase.

She can be seen acting like a bit of a temperamental lunatic, partially because she appears to be completely insane in her final form, with her glowing eyes and psychotic laugh, but also because she takes the form of a crescent moon.

Snoring noises can be heard in the over-world prior to starting the fight, implying that she is nocturnal (or often falls asleep) and only wakes up during the day whenever disturbed.

Hilda Berg is first seen sitting on a cloud when she suddenly inhales it, turning her body zeppelin-shaped. It is also very hard to see Hilda on her cloud, as she swallows it almost immediately.

In the first, third, and fifth phases, Hilda Berg flies up and down on the right side of the screen while small purple toy zeppelins appear from behind her to shoot a single bullet at players. Every 4th single bullet is parryable. Hitpoints = 10/10/10

She will attack every few seconds by laughing, which sends a physical onomatopoeia of her laughter across the screen that can damage the player(s). The projectiles travels straight forward. Hitpoints = 220/130/150

"You won't get too far... it has been foretold in the stars."
—Hilda Berg, Phases 2 and 4 death screen

Hilda Berg's second and fourth phases are each divided into 2 notable sections, defined by whether or not she transforms. In these phases, Hilda Berg will begin using a new attack that will temporarily turn her into a zodiac constellation, each with its unique attacks.

Hilda Berg will inflate with a deep breath, propelling herself across the screen's left edge, making a constellation as the screen darkens. She will reappear, moving backwards to the right side. In a cloud of smoke and stars when she goes through the constellation, she transforms into what is shown and uses new attacks. Throughout this phase, Hilda Berg will transform into one of three constellations, which are as follows:

In Simple mode, her transformation will always be Taurus then Gemini.
Hitpoints = 550/550

In Regular Mode, her transformation will either be Taurus then Gemini, or Taurus then Sagittarius.
Hitpoints = 468/468

In Expert mode, her transformation will always be Gemini then Sagittarius.
Hitpoints = 450/480

After taking enough damage in each constellation form, Hilda Berg will return to normal for a short time before transforming again. During this time:

After taking enough hits, Hilda Berg shudders and shakes erratically, groaning and yelling in pain. The sky turns to night, and Hilda Berg swirls around chuckling in sinister way, transforming into a massive crescent moon with her face.

In Simple mode, the fight ends with Hilda shaking, without entering the final phase.

"You lost too soon and I was only half moon!"
—Hilda Berg, Phase 6 death screen

In this phase, Hilda Berg almost fills half the screen, giving players much less room to move around in. Intermittently Hilda's face will spontaneously extend outward, causing damage upon contact, as she grins while laughing psychotically. When she does this, golden steampunk-style gears are shown from where her face popped out.

In this form, she cannot directly attack, but a line of UFOs will come out from the hole where her face would be and attack with vertical laser beams. The different colors of UFO attack differently; Red UFOs will not attack until the player is under them, and gold UFOs attack just in front of a player. In Expert mode, the UFOs' lasers last longer. The UFOs have hitpoints and being shot at will generate cards, but it is impossible to defeat one normally. Hitpoints = 9999

Finally, replacing the toy zeppelins are shooting stars that fly from right to left at fluctuating speeds. Occasionally, a pink one will appear. In Expert mode, the stars fly much faster.

Once defeated, Hilda will have a dazed expression while her crescents and nose appear crippled, broken, and empty. 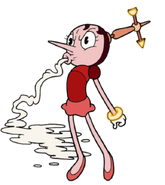 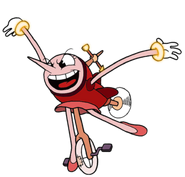 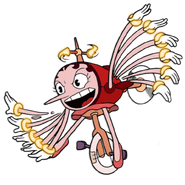 Hilda about to summon a tornado 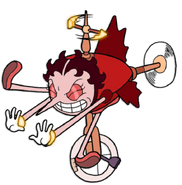 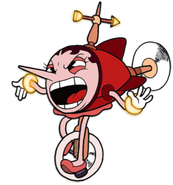 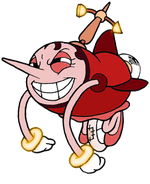 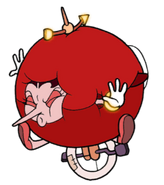 Deflating across the screen 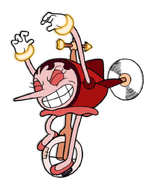 Hilda summoning a constellation to transform into 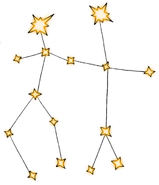 One of the Gemini Twins summoning the vortex 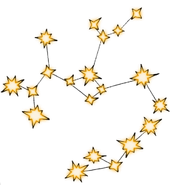 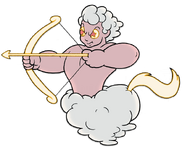 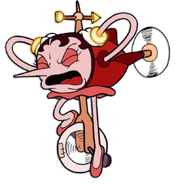 Transforming into the crescent moon 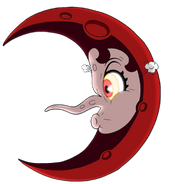 About to launch her face 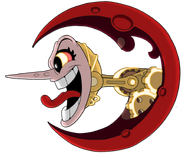 Hilda extending her gears out 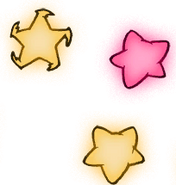 Stars and the Parryable star

Hilda Berg as seen in the good ending 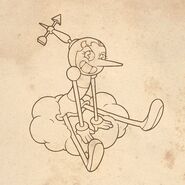 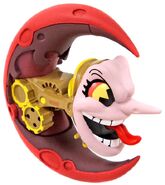 Hilda in the Cuphead's promo from Famitsu

Hilda's toy zeppelins being destroyed rain down scraps, one type of scrap is pink and can be parried. It will give the player access to the unused plane laser weapon after parrying enough of them. This is changed because of parity for the game, as the developers do not want one-off gimmicks for a specific fight.