3 (if counting his stomach phase)

Glumstone The Giant is one of the new bosses in the DLC, fought in the level Gnome Way Out. He is the keeper of the Gnome Berries.

Glumstone is a giant, that wears roughly-tailored clothes. His head has a few bruises with bald spots similar to the peaks of a mountain and his beard lays across the battlefield where the player(s) actually have to walk on. He has a big red nose and a few missing teeth, with pink puffy cheeks and thick eyebrows. Though not shown in-game, he wears open-toe sandals and a blue belt.

The gnomes are common stereotypical gnomes, with pointy hats and clothes that come in multiple colors such as blue, teal, pink, and red on the cover of Cuphead in A Mountain of Trouble. Unlike other characters in the game, they are depicted as having stick figure-like lines for limbs.

In his second phase, he rips off his beard, revealing a five o' clock shadow, and a bandage on the left side of his cheek. Glumstone then pulls out two hand puppets, both with buttons for eyes. One on his right hand as King Dice, and the other on his left as The Devil. King Dice is dressed as a jester, with a red and purple color scheme, and small bells on the end of his tassels, while The Devil is dressed as a king with a purple robe, a crown, and is coated with red fur instead of black. The two puppets continue to play catch with a large burlap sack, until phase three begins.

In Cuphead: Cartoon Chronicles & Calamities, he's shown to be somewhat troublesome while also easy to trick, as he is easily baited into emptying a lake he guarded from Cuphead. In A Mountain of Trouble, he's described as grumpy, although he has appeared to have mellowed out in recent times. According to him, he used to be very big on curses, cursing everything that slighted him. He is known to throw boulders at those who provoke him, such as yodelers who make his days miserable. In-game, he is shown to have a fun and innocent side, as he takes glee in performing his puppet show in the second phase.

As shown in A Mountain of Trouble, his gnomes are shown to speak in rhyme, and are easily offended when referred to as "small". They are shown to respect Glumstone and appear to have a symbiotic relationship with him. They are also sportsmanlike and fair, being the judges of the camp competitions. In-game, they are all shown constantly smiling, even as they get knocked off in the fight intro. They appear to enjoy puppet shows.

Glumstone starts out as a snowy mountain in which his mouth is a goldmine. A gnome smashes his pickaxe into a chunk of gold which is his golden tooth in an attempt to mine it while two other gnomes watched on. This cause Glumstone to awaken, crushes the wooden scaffolding and his stony mountain hide explodes into pieces blowing away the gnomes and beginning the fight.

"You thought you were bold, but I'm boulder."
—Glumstone The Giant, Phase 1 Death Screen

In the middle of the battlefield, there are five rock pillars that constantly moving up and down randomly, making player(s) evaluate where is safe to dodge harm's way. Two pillars will fully retract into the ground during this phase. In Simple Mode, only one lowers much later in the fight. In Expert mode, two immediately lower and a third one will lower later.

Periodically, Glumstome will do one of three attacks:

Blue gnomes are hidden in his beard along the floor. When walking on them their hats will be squished for while and then they will poke their hats up through the beard and will stay there for a while before lowering back down. Some that are right in the middle of each pillar may struggle to poke through the beard for a while then permanently stay on the beard. They dance in places and can be defeated. They periodically shoot a puff of yellow cloud by pulling on their beard, cycling between straight above, diagonal, above, and the other diagonal. In Simple Mode, they jump up less often and some puff is pink and can be parried. In Expert Mode, they jump up more often.

Cyan gnomes show up at the base of the pillars and them climb up the side with their hands and feet visible, after they reach the top of it, they wind up and strike twice at the top of the platform with a hammer. They can be defeated.

After taking enough damage, he starts pulling on his beard out of anger, as his face turns red and his irises radiate. He holds onto the platform and pushes it away, ripping his beard off in the process while writhing in pain, as his eyes revolve around each other. After he realizes his painful mistake, he screams and falls down into the background, ending the first phase. Hitpoints = 575/450/510

"Ah, such a delightful treat... I had a hand in your defeat!"
—Glumstone The Giant, Phase 2 Death Screen

Glumstone is ridden of his beard and left with stubble, has a bandage on his cheek and chin and also a black eye. All the stone pillars are flushed to the ground and he retreats to the background. He holds up two puppets which resemble King Dice as a jester and The Devil as a king. Two groups of gnome are lifted up in the foreground on the bottom corners to spectate.

The King Dice puppet is holding a bag of buttons which acts a like big rubber ball. The bag has to be avoided at all costs as the two puppets throw it at each other as if playing ball while attempting to cause damage to the player. The puppets are raised or lowered and it changes where the ball bounce.

When this phase ends, the button bag explodes, King Dice and the Devil puppet shakes around, slightly teared up and they are lowered by Glumstone. The gnome spectators platform is also lowered. Shaking in anger, Glumstone grabs the platform and crushes it, eating the rocks and the player(s). With a look of satisfaction on his face, Glumstone burps while the scenery changes. When the scenery changes to Glumstone's stomach, his ulcer laughs smugly before the fight continues. In Simple Mode, the battle will simply end here with him shaking in anger and the puppets stays on the screen shaking. Hitpoints = 575/585/663

"Give up now is my suggestion, lest you give me indigestion."
—Glumstone's Ulcer, Phase 3 Death Screen

The fight continues inside Glumstone's stomach where the player has to stay standing on several crocodile skull heads that act as platforms in order to avoid falling into the stomach acid. The player must defeat Glumstone’s sentient ulcer as it moves horizontally while spitting out chicken drumsticks or bones to the skull platforms. In Expert Mode, the ulcer moves around quicker. While the projectiles damage the player, the ulcer itself has no hurtbox.

If one of the skulls platforms eats a drumstick, it will submerge itself into the acid lake, preventing the player from jumping to that platform, only letting them fall into the acid, which can damage the player. However, If one receives a bone, the skull will not eat it and it will open its mouth in which its tongue will proceed to ring a cowbell. This signals the player to parry slap the bell, which will cause the skulls that had submerged to reemerge from the acid, allowing the players to jump from one to another. In Expert Mode, he can spit out two projectiles in quick succession.

When Glumstone's ulcer is defeated, it will be in a daze and stick its tongue out. Hitpoints = 465/527 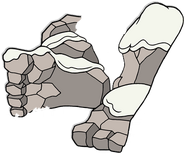 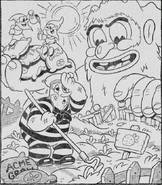 Saltbaker working on his gnome berry farm in the epilogue.

Glumstone (far top right) at the end of the credits.

The pink drumstick is used as a failsafe. If he shoots out two drumsticks rapidly when there are not enough platforms left, the player can parry it and wait for him to spit a bone.

The last phase used to be a bit different, the name used for this phase is "Gnome Leader" aside (which is not related to his stomach too much), there is an unused mechanic where you have to parry a thermometer to cool it down or some liquid (Glumstone's stomach acid or boiling water) gets too hot for the ground to stand on.