Fiery Frolic is a level in Inkwell Isle Two, where the fight with Grim Matchstick takes place. It is represented on the map by a tower with a dragon spiraling over it. There is a shortcut where you go behind the huge mountain above the Bird House where Wally Warbles is battled. In order to unlock Fiery Frolic, you must beat Carnival Kerfuffle or use the shortcut mentioned earlier. Once you beat Fiery Frolic, you unlock Mausoleum II, Porkrind's Emporium, and an NPC that's a light bulb.

The actual fight takes place in the clouds surrounding the tower, which rotates in the background. Once you reach the final phase of the fight the sky will darken as a thunderstorm begins. 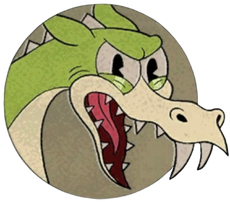 Grim Matchstick introduces himself making a spooky gesture with his wings and face. In this phase, Grim mostly hangs out at the right side of the arena and damages the player(s) with these attacks:

Using Charge Shot is useful here since you require to dish a lot of damage as well as charging your shot while you dodge his projectiles and his tail. Remember to look below the screen for his tail to find out where it will rise and don't go near his mouth when he charges a waving fireball.

After taking enough damage, Grim will fly off screen. You'll see him in the background, soaring past. He then goes to the left side of the screen, starting phase two. 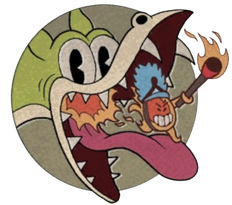 "Sorry, I didn't mean to put you in the h-h-h-hot seat..."
—Grim Matchstick, Phase 2 Death Screen

In this phase, Grim will proceed to move on the left side of the screen and he will open his mouth and sends out a parade of marching fireballs that travel across his tongue, which he stretches out as a platform. Some of the grinning fireballs will jump either directly towards the player or to the right side of the screen (no matter the location of the player(s)) in an arc trajectory, and try to damage the player(s).

Grim also shoots out smoke or fire from his nose to damage the player(s) if they run into it.

In this phase you still need platform maneuver and jump dodging is important against his jumping fireballs. Avoiding his nose is essential to prevent him damaging you as well as to keep yourself above the cloud platform to give you time to evade the jumping fireballs. Lobber Shot is useful here since the shot falls down on his hitbox because if you're on the upper clouds you can't actually hit him unless you hit him in a diagonal order preferably south-west.

After enough damage, Grim will look defeated, with his eyes bulging out, and him rolling his tongue back. But after this, he grows two more heads, and the fight continues.

In Simple Mode, however, the fight just ends with Grim's eyes bulging out. 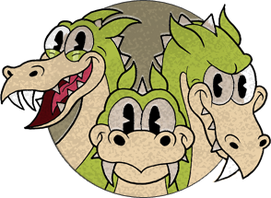 In the final phase, Grim will grow out two more heads and moving his heads in a cycling manner. His other two heads will shoot out 6 to 9 cluster fireballs that slightly homes on the player(s), which can be destroyed but clustered into four directions in a plus formation.

Grim's middle head will sometimes morph into a flamethrower and fire a stream of flames two times in a three second charging time delay before returning to normal.

In this phase you need platform maneuver, dodging, and most importantly timing your attacks. Try to prevent attacking his cluster fireballs is important to prevent it from clustering. His flamethrower can be dodged easily since it only hits the slightly above the middle area of the screen. Using Charge Shot is very useful since you have time to dodge his cluster fireballs as well as dish out huge damage on him.

After dealing enough damage, the fight will end. All three of Grim's heads will have cross eyes, and their tongues out.

Retrieved from "https://cuphead.fandom.com/wiki/Fiery_Frolic?oldid=50505"
Community content is available under CC-BY-SA unless otherwise noted.