Cuphead Wiki
Register
Don't have an account?
Sign In
Advertisement
in: Cut or Unused Characters, Male, Bosses,
and 4 more

The Demon Bat is an unused boss in Cuphead. The Demon Bat was a horned bat who would’ve been fought in a hell-like environment. The bat would rest in a coffin, and would open and free his bats, which you would need to dodge in order to succeed, he would also chase the player(s) around by flapping his wings.

The Demon Bat was a large black bat, with red wings, and small horns attop his head. The bat didn't have any legs, only a stubby tail, he would also have pink lips, accompanied with a large pink nose. He also had gray rings around his eyes.

Ditto, but from another angle 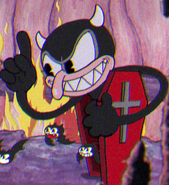 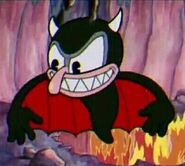