Weapons have a regular fire and an EX attack, which can be used in exchange for one card from the super meter.

Peashooter - An average damage weapon with good range. It has a light blue color and looks like a laser beam. The standard issue weapon that is given to the player. It travels straightforward at a high velocity, for a boss that can give you a lot of horizontal distance to dodge, it is a good choice.

EX: Mega Blast - Fires a large, slow-moving projectile that deals considerable damage. It will hit a target three times before disappearing, it is a good burst of damage that can be aimed in the usual eight directions.

"Short range with great damage -- if you can keep close to your target."
—Description

Spread - A high damage spread gun that works best if you can get close to your target. Shots disappear after a short distance. It has a red color and looks like some small spikes. Best used to deal high burst damage when the opportunity presents itself, especially when that boss is stationary. In the game's code, this weapon is called 'spreadshot'.

Chaser - Fires small, slow-moving projectiles that home in on the nearest target. Deals about half the damage compared to Peashooter. It has a lime color and looks like a star with a small tail. Best used when the concentration is better allocated to dodging.

EX: Chaos Orbit - Spawns a four slightly bigger projectiles that circle the player and protect them from incoming enemies. when there is one orbit already, using another EX will replace the original orbit and those will automatically home in on the closest hitbox. It is good when some bosses have minions like Baroness' jelly bean or Rumor's worker bees.

"Medium range and good damage with a slower rate of fire."
—Description

Lobber - Fires a lobbed projectile that arcs upwards, and falls back down and bounces on the floor until it bounces twice and pops on the third contact of the floor, deals great damage, but has limited range, each shot deals about two times more than Peashooter. It has a violet color and looks like a sphere. It is good against bosses that doesn't move a lot. It doesn't required a lot of aiming as it seems. It also has the property to set up some damage as it bounces on the ground. It is very effective against Grim Matchstick in all phases. In the game's code, this weapon is called 'bouncer'.

EX: Kablooey - Like a Lobber shot, but bigger and have an Area-of-Effect damage which deals the same damage in the area. It can easily take out groups of minions at a range but it is still affect by gravity and shooting it upward or the top corners may miss the target far away, it does not bounce like the normal version attack as well and goes through some platforms like clouds in Grim Matchstick fight and platforms in Rumor Honeybottoms fight.

"Hold attack to increase damage. No rapid fire, so precision is key."
—Description

Charge - A high-damage, high-velocity shot that requires the player to hold down the firing button for maximum effectiveness. It has an orange color and looks like a wave for the uncharged projectile and two waves twirling each other for the charged projectile. Releasing the shoot button before the charge is complete will fire a small, light damage projectile. It needs a lot of precision to use and it it will do quick work to bosses if you master it.

EX: Radial Barrage - Releases a short-range, but a big Area-of-Effect burst of damage from the player, it is very good at the phase of the Phantom Express, especially in the last phase, that is The Head Of The Train.

Roundabout - Fires a boomerang-like projectile that moves in the direction it is fired for a moment, but proceeds backwards for a long distance at a much higher velocity. It has a turquoise color and looks like a slotted ring. Best used when firing backwards or fleeing obstacles and to set up damage, this is the second option to chaser for bosses players want to focus on dodging as you still have to line with the boss most of the time, but it deals way more damage. In the game's code, this weapon is called 'boomerang'.

EX: Jumbo Rebound - Launches a larger, thicker and closed version of the standard shot that will try to go back to the player. You can dodge it and it will chase you until all seven hits are used up or it touches the player again, there is a glitch that one extra hit will be counted to start the count down so eight hits worth of damage can be dealt in total.

EX: Chomper Missile - Fires a rocket which starts slow but picks up speed after a short distance, and chomps in regular intervals whatever it comes into contact with. It is best used when the boss has a big horizontal hitbox like Hilda Berg.

Lobs a small bomb from the plane in a downward arc that does above average damage. It has an Area-of-Effect damage and it can stack with the direct hit. It will best when you don't want to stay in a straight line horizontally from the boss.

EX: Magnet Mine/Missile - Fires a barrage of magnets that home-in on nearby enemies and explode. It is best used when there are too many minions on screen and you want to clear the screen.

When the plane is in shrink form, they can still shoot a short range weapon, and they are weak, it is just to sneak in some chip damage when in mini form, or to complete the Bravo Zulu P-26 achievement .

Super attacks can only be activated once the player has filled their super meter with 5 cards through parrying objects or damaging enemies. There are only three, and they are each extremely powerful, and to be used carefully.

Super Art I - Energy Beam - After a brief pause, stalls the player in the air and fires a large stream of liquid from the head of the player. Fires exclusively horizontally, dealing massive damage. It stuns the boss slightly every time it hits.

Super Art II - Invincibility - After a short animation, the player is allowed 4.85 seconds of invincibility.

Super Art III - Giant Ghost - The player spawns a ghost counter-part of themselves which constantly spins, dealing high damage per hit. The ghost is controlled by the player without removing control from the player's original character. This can make it difficult to manage both characters on screen via a single controller. The ghost will disappear after 7 seconds and leave a heart for you to parry and fill the super meter. It also give the boss a short stun every time it damages them, giving more time for the player to react and to deal damage.

Aeroplane Super - Super Bomb Morph - Transforms the player into a giant bomb, slowing movement speed slightly. While all other attacks are temporarily disallowed, if the player hits the target, massive direct and Area-of-Effect damage is dealt. However, any object that comes in contact with the player will detonate the bomb. 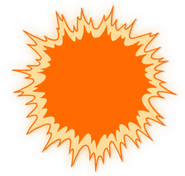 Peashooter potion given by Elder Kettle 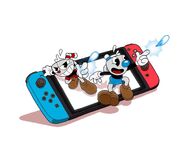 The full eightway on cuphead

All weapon icons in cuphead

Mugman Unused Data
Add a photo to this gallery
Retrieved from "https://cuphead.fandom.com/wiki/Cuphead_Wiki:List_of_Shots?oldid=57616"
Community content is available under CC-BY-SA unless otherwise noted.