"All aboard!! Next stop -- your funeral."
—Conductor, Death screen

The Conductor is the second phase mini-boss of the Phantom Express in Railroad Wrath.

The Conductor is shown to be a giant angry skeleton who takes the role of the train conductor because of his crimson and yellow cap. He seems to be missing the second-to-last teeth of his upper denture.

His full body is shown in the Cuphead comics. He is depicted as a normal sized, cartoonishly exaggerated Human skeleton wearing white, Mickey Mouse-esque shoes.

The Conductor appears to be very protective of the train, as he constantly looks around for any other threats while his hands are down. He also seems more than willing to give Cuphead and Mugman a ride to their funeral if he defeats them. His speech pattern, as indicated by his death quote, also show that he exhibits stereotypical train conductor tendencies. In the comics, it is shown that he runs a tight ship on the Phantom Express itself, as shown by his response to Elder Kettle not having a ticket.

In this phase, after Blind Specter is defeated, the Conductor will pop his head and his arms up while they are spinning, before slamming his hands down in an attempt to crush the players.

The platform must be navigated to the area beneath his head to avoid damage from the hands. Players can also avoid taking a hit by standing on the edges of the platform.

The Pumpkimps from the first phase make a return in an attempt to forcibly move the platform by dropping ingots onto its edges. Hitpoints = 4/4

There is a way to avoid the hands, while not moving the minecart. If you stand in between T.Bone's hands, you can avoid taking damage.

Upon his defeat, he will appear screaming as he and his arms slowly fall back into the train. A xylophone diminuendo can be heard during this sequence. Hitpoints = 320/325/325 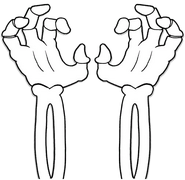 The Conductor knocked out

Pencil test of The Conductor's idle

Pencil test of The Conductor's intro