"Hey, short stack! This ain't a place you wanna be hanging 'round."
—Chips Bettigan, Death Screen

Chips Bettigan is a mini boss in All Bets Are Off! of Inkwell Hell that appears in the boss fight with King Dice when landing on Space 2.

Chips is a stack of blue, yellow, and red poker chips wearing a cowboy hat, and sporting yellow eyes and a red nose.

Chips Bettigan is rowdy, charming, and never one to accept the idea that the odds are stacked against him. [1] He is a very persuasive being who seems to enjoy fighting, as evidenced by the shouting of "All Right!" and "Yeehaw!" He also enjoys talking tough, as evidenced by his death screen.

Before his battle begins, King Dice stacks Chips Bettigan up piece by piece.

This boss has only one known attack: he travels from one side to another by moving pieces of his body to damage the player, but the attack is rather easy to avoid because of how slowly the chip stacks are moving. As the battle goes on, Chips begins to make noises such as laughing. In Expert mode, the chip stacks move faster in harder patterns.

When Chips is defeated, he moans in pain, his top part falls apart, his hat falls off, and his two bottom parts fly away. His eyes are shown to be on separate chips, though his eyes are usually seen on the same chip. 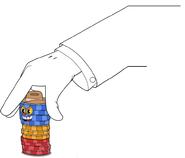 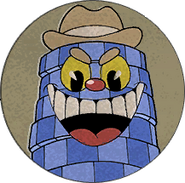 Chips Bettigan's icon for the game over screen.

Background
Add a photo to this gallery

Retrieved from "https://cuphead.fandom.com/wiki/Chips_Bettigan?oldid=56849"
Community content is available under CC-BY-SA unless otherwise noted.