Carnival Kerfuffle is a level in Inkwell Isle Two, where the fight with Beppi The Clown takes place. It is represented on the map by a roller coaster.

The actual fight takes place on the roller coaster around an amusement park. It's nighttime, and multiple different things could be seen in the background. There's a Ferris wheel (from the overworld), there's a massive hot air balloon with a creepy smile at the bottom, there's a moon with a face, and a massive gumball machine. There are also other buildings and a fountain.

You don't need to defeat any other bosses in Inkwell Isle Two to unlock Carnival Kerfuffle. It is located west southwest to Quadratus and southeast to Pyramid Peril. Once you beat Carnival Kerfuffle, you'll unlock Funhouse Frazzle, the Die House, and Fiery Frolic. 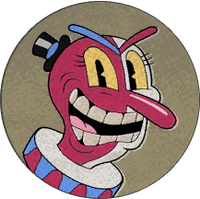 "Why'd the clown drive over the cup? He wanted to crack him up."
—Beppi The Clown, Phase 1 death screen

Before the battle begins, Beppi The Clown will be standing, seemingly surprised or excited that Cuphead and Mugman are there. A sentient bumper car then comes in, and Beppi jumps into it.

Throughout this phase, Beppi and his bumper car will try to run over the player(s). Beppi in his bumper car will move left and right, then charge at the player(s). Beppi doesn't have a pattern when he goes left and right, he seemingly just goes randomly left or right a random distance. This makes it hard for the player(s), since sometimes he'll move a little, and sometimes he'll move a lot. Since this is random, and he charges at random times, it's key to know when he's going to charge. To know this, look and listen. Beppi and his bumper car will go a little bit back, both of them showing their teeth. You'll also hear a honking noise, so that's when you know to he's going to charge. In order to dodge this, you simply have to jump over Beppi.

But that's not the only thing you have to worry about. Cardboard ducks will be hanging from above, and you'll have to dodge them. They can be shot, and when you do so, they'll spin around and no longer damage the player(s). There are three types of these ducks:

Once you've done enough damage, you'll have to wait for Beppi to run into a wall for the animation. He'll hit the wall, and fall off his bumper car into the abyss. He'll come back up, with a weird helium device which turns him into a balloon. This commences the next phase. 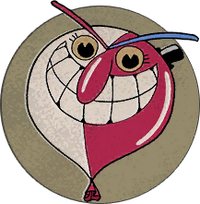 "What'd the Balloon animals think of the cup? Quite the gob-let-down!"
—Beppi The Clown, Phase 2 death screen

In this phase, Beppi The Clown has turned himself into a living balloon. This phase is tricky, as there are a lot of things to keep track of.

All the while, Beppi will inflate balloon dogs from his balloon machine. There are six tubes that can send out these balloon dogs. These balloon dogs have sharp teeth, and will continuously chase the player(s) around the level until they are shot or hit the ground (some are pink and can be parried).

After enough hits, Beppi's machine will fall along with his body. Beppi's balloon head will stay, with a sad expression and cross eyes. His head will fly off, then normal Beppi will come back in on a carousel horse. This commences phase three. 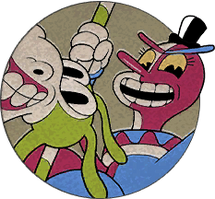 In this phase, Beppi The Clown will be on carousel horses. This phase is very difficult.

Beppi will be riding carousel horses for this whole phase. There are two types of horses he'll be riding:

Throughout this phase, the roller coaster from last phase will keep coming (unless you're on Simple Mode). This is tricky because when the player(s) try to evade the coaster passengers or its head, they might accidentally hit the horseshoes. Try dashing over the green horseshoes when they are low and getting to the right position and jumping in one spot for the yellow ones.

Once taking enough damage, Beppi will cry on his horse, with his head back. His horse will look exhausted, and go up and off the screen. They'll come back to the middle of the screen, still crying, then Beppi will fall (once again) into the abyss. Then Beppi starts maniacally laughing, while coming up as a massive carousel, initiating the final phase.

Though in Simple Mode, the fight ends there. Beppi will just cry while his horse is exhausted. 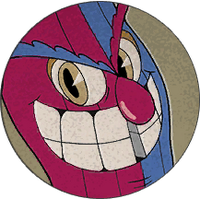 "What do you call a cup that falls off a swing? A tumbler!"
—The Carousel, Final phase death screen

In this phase, a massive carousel will appear. There are swings from the carousel which Cuphead and Mugman can jump on. This phase is the hardest out of the four.

The roller coaster from the last two phases is now going at an immensely fast rate, making it near impossible to go down on the ground without taking damage from the coaster. You must use the platforms from the carousel to avoid it.

While maneuvering through the platforms, The carousel will summon penguin clowns from his mouth to throw baseball projectiles at the player(s) whenever the coaster is not on the ground. These penguins can easily be killed, by either being shot by the player(s) or getting run over by the roller coaster.

To beat this phase, just try to maneuver on the platforms while focusing on dodging the projectiles and shooting at Beppi, don't hesitate to use your super on this phase if you are low on health.

Once taken enough hits, the carousel is defeated and seems as he is splitting apart. 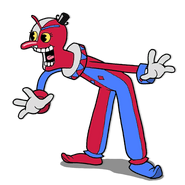 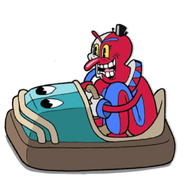 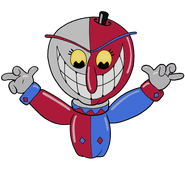 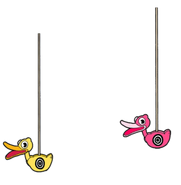 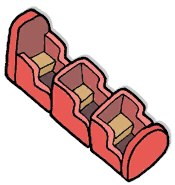 Overworld view
Add a photo to this gallery

Retrieved from "https://cuphead.fandom.com/wiki/Carnival_Kerfuffle?oldid=54769"
Community content is available under CC-BY-SA unless otherwise noted.