View source
watch 01:19
Who is Cala Maria?
Do you like this video?
Play Sound

Denise Hatton
Cala Maria is one of the bosses on Inkwell Isle Three on the boss level, "High Seas Hi-Jinx!" Her stage is a side-scrolling shooter level.

Cala Maria has a physical appearance reminiscent of a typical humanoid female character. She is a giant, tall, slender mermaid with fairly wide hips. She has pale lavender-pigmented skin, an exposed midriff, a small button-nose, and two scar-like markings on the bicep of her left arm (though how or why she got them is unknown, but it COULD be a reminiscent of eel bite marks).

On her head, she has a dead, purple octopus with pale lavender eyelids over X-crossed eyes, with a lighter purple coloring and pale pink suckers under the tentacles. The octopus clearly acts as her hair since the three tentacles in front of Cala's face are flipped back over her head, resembling curly hair-bangs in a pompadour, while the octopus's head vaguely resembles a hair bun. Although it appears to be dead, the octopus’s eyes clearly open during Cala’s “summoning” animation, revealing simple, black pupils.

As a sign of her mermaid status, Cala wears a sky-blue sea-shell bra with no shoulder straps, and her lower body is replaced with a sea-green, fish-like tail with round scales, connected with a water-ripple-like pattern below the waist line and although we don't see her full body in the game, various merchandise has shown that her fin tail is shaped like two small waves split in two with three rounded tips on each side.

However, in her second phase, Cala Maria gets bitten on her belly and shocked by two eels, resulting in a much more menacing appearance—a gorgon-mermaid hybrid, greatly resembling the famous mythology figure, Medusa.

Her once pale-lavender skin turns to a mint-green color. Her fingers become longer due to her fingernails becoming claw-like. Her lips turn an emerald-green color, her tongue becomes forked and reptilian and her teeth are now quite sharp, forming an eerie, Cheshire Cat-esque grin. The markings on her arm remain unchanged.

Her lower body takes on a more forest-green hue and the scales become sharper and more triangular. Her once sky-blue sea-shell bra is now a green bikini top made from either seaweed or moss.

The most distinctive part of her new form is the octopus on her head, which has now seemingly fused onto her head and has become a marginally different shade of purple. The tentacles each transform into menacing-looking snakes with lavender, segmented underbellies, yellow, cat-like eyes, and small fangs in their mouths. Only the snakes acting as her bangs are active, while the rest are asleep.

Cala Maria is said to be playful, but not to be trifled with.[1] Cala Maria seems to be a flirty and vivacious being. She appears to have some interest in Cuphead and Mugman, as seen in her intro where she makes a sweet "yoo-hoo!" sound while fluttering her eyelashes and making a pose, and in the ending sequence in which she is staring at the brothers (although, as a siren, she could only be doing it to catch them off-guard as well). Her first phase death message only helps support this. However, she seems to become more cruel after she is forcefully transformed into a gorgon-mermaid, due to electric eels biting her hips and shocking her.

Cala also seems to have a strong connection with fish and aquatic animals, as she can summon them at will to help her, and also use the fish as weapons without them apparently caring much. It seems that she eats people, sense she always belches and burps up ghost when she attacks.

Cala Maria menacingly rises from the ocean, and then flips her octopus hair back while striking a pose and flirtingly calling for Cuphead and Mugman. It sounds like she says, “Yoo-hoo!” In the beta version, she was seen performing the same animation as in her Ghost Pirate attack.

"You are a cutie...I am not sure if I should catch and release!"
—Cala Maria, Phase 1 Death Screen

In this first phase, Cala has a wide of range of attacks at her disposal to corner the players and damage them. It is also important to note that she can only be damaged by shooting at her head at all times. Because of this, her first phase is often hard to beat for many players. Cala has two main attacks:

Cala can supplement these attacks with sea creatures that she summons to aid her and corner the players as she executes her other attacks:

After taking enough damage, Cala Maria will gasp in shock as two electric eels appear and bite her flanks, shocking her in the progress. While being electrified, her octopus tentacles turn into "snakes", her fingernails turn into claws, her skin turns to a greenish tint, her seashell bra turns into one made of seaweed, her tongue turns into a forked tongue, her teeth sharpen, and her eyes become yellow with slit pupils, making her resemble a gorgon, or as an example, Medusa, as she laughs mischievously, thus beginning phase 2.

"You dare to gaze?! How 'bout stone boots so you can swim with the fishes!"
—Cala Maria, Phase 2 Death Screen

In this phase, Cala Maria will not attack the player, but instead, the electric eels will attack on her behalf as she taunts the player. These electric eels constantly appear around her and shoot five-way split bullets at players. Some of the bullets can be parried. If players don't destroy them fast enough, it will become a bullet hell situation as more eels surface and fire. Hitpoints = 40/45/45

While the eels are attacking the players, Cala will occasionally shoot an extremely massive ray at them, turning them to stone á la Medusa. Players can avoid petrification by not moving or shooting at all, or avoid the ray before she fires it by going up above her but they have to be fast. Player(s) being petrified needed 22 inputs to set free from it in all settings of the game.

After she takes enough damage, her body will turn to stone and crumble as her head floats into a cavern. In Simple mode, her entire body including the head will turn to stone with a shocked expression and her snakes looking shocked and in pain as well, ending the battle without entering the cavern.

In this phase, players traverse through a cavern filled with corals as they avoid getting hurt by them and the spike columns that randomly appear. In Expert mode, the scrolling section itself becomes faster in this phase, making it harder to dodge the spike columns, which also appear more often. The snakes will spit out bubbles with skulls inside that move up and down. In this phase, Cala still uses her stone gaze, but this time, instead of shooting a ray, she shoots a large green ghost to turn the players to stone. Also, the stone gaze is now unavoidable even if the player doesn’t move.

Once she takes enough damage, Cala is defeated. During this cutscene, she looks away in sorrow while one snake sadly plays the violin. 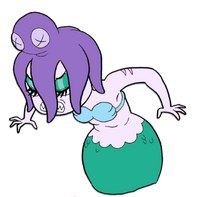 Cala arising out of the water 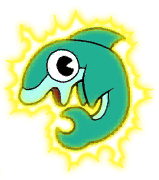 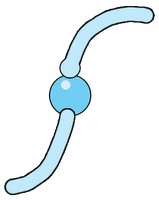 Cala after dropping a fish

Cala holding in her breath

Cala surprised by the eels 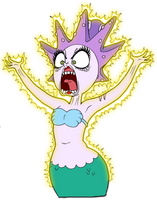 Cala in the process of being electrocuted 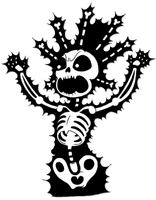 Cala knocked out on simple mode 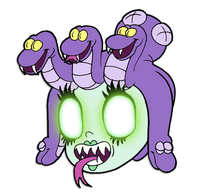 A skull in a bubble 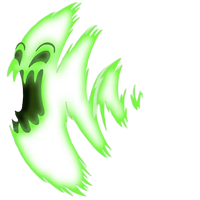 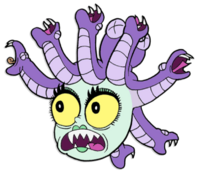 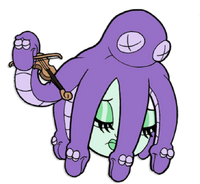 Pencil test of Cala when defeated

Cala Maria as seen in the good ending

Animation of Cala burping and belching

There is code for an unused blue fish that would have shot a spinner at the player, which would start off with a bubble and the tails appear shortly after. They will start spinning around and travel mainly on a straight line with the ability to slightly shift its path to home in on the player. The most likely reason it got removed was the difficulty of dodging it in addition to the other attacks she uses. The script for the blue fish appears to be finished, meaning it was scrapped later in development.

Cala Maria is an homage to some of the most famous, fun-loving female characters from classic animation, including the iconic Betty Boop and Popeye's leading lady Olive Oyl. Additional references included Disney's 1938 Silly Symphony short Moth and the Flame and the mermaid boss from Fantastic Parodius aka Fantastic Journey.[2] Her overall attitude during her second phase was inspired by Madame Medusa from The Rescuers.[3]