3 (If counting his Passive Form)

Luke Hatton
Cagney Carnation is the boss of the level titled Floral Fury. He is one of the bosses that can be encountered in Inkwell Isle One.

Cagney Carnation, like his last name implies, is a tall, sentient carnation flower.

At first, Cagney seems like an innocent-looking flower with a stamen as a face, orange cheeks, a small pointed nose, six orange petals, each with stripes of a darker shade of orange on the tips, large leaves that act like hands, and a dark green stem with four light green leaves on the bottom.

However, shortly after, Cagney's stem grows small yellow thorns, his petals get a pointed tip in the middle of each of them, his orange cheeks completely disappear, his nose gets longer, his eyes become larger, and his leaves turn into long arms with actual hands.

In his final phase, Cagney will have his hands planted into the ground (presumably absorbing the nutrients from the ground to make himself stronger), and his usually round teeth and petals will have a sharper shape, his stem gets way larger, and he seems to have vines come out of his bottom petal.

Cagney is sneaky. He seems to delight in catching his enemies off guard with his appearance, posing as a harmless and adorable flower before roaring loudly. His constant maniacal smile during battle also implies that he's either too overconfident about winning or he enjoys the fight more than he should, considering that his soul and life are on the line. Also, it seems Cagney is easily angered by losing and may have apoplexy since he appears to pass out from anger in his knockout animation.

Cagney smiles at Cuphead and/or Mugman in an innocent way before suddenly roaring/yelling at them. He then begins his characteristic dancing idle animation as the battle begins.

"Fools who attempt to fight this will leave with allergic rhinitis!"
—Cagney Carnation, Phase 1 Death Screen

At the start of the battle, Cagney is capable of extending both his face and his arms as a lunge to quickly lash out and deal damage. To avoid this attack, players must either jump on the platforms or get off of them, depending on which section Cagney is aiming for. In Expert mode, he lunges after much less of a delay.

Another attack called "Magic Hands", when using this attack, his stem splits into a pair of legs and he cups his hands together, opening up to shoot either:

He can chain three attacks at most before going back to idle animation. This attack is referred to as "Magic Hands" because the action he is doing is similar to showing a magic trick, and glitters shines when he opens his "hands". In Simple mode, he can only chain two attacks at most, and the acorns and the sycamore seed fly slower. In Expert mode, there will be four acorns, and both the acorns and the sycamore seed fly much faster.

Cagney can also morph his face into a Gatling gun to shoot different colored seeds. Each seed has different abilities:

In Simple and Expert mode, all of his attacks are divided into sub-phases a lot more pronounced than most bosses in this game.

After taking enough damage, Cagney will pull on his petals in frustration and thrusts his hands underground. While this happens, he undergoes a scary transformation, resembling a lion in some way. His petals will become sharp and more spread-out, he develops a even wider and more insane smile with razor-sharp teeth, his nose grows longer until the tip bends slightly upward, his eyes become slightly yellow and his pupils intensely dilate. As his arms sink underground, they become thorny and sprout back out as spreading thorny vines that make the lower ground untouchable, forcing the protagonists to stay on the three flying platforms.

In Simple mode, Cagney will simply pull on his petals without spreading his thorny vines when defeated.

Cagney will start releasing dandelions from his tongue that fly across the screen and when they come in contact with the player that applies a nauseous effect and the screen will get blurry. At the same time, vines will grow below 1-2 of the flying platforms and then shoot upwards, briefly encasing them and making them impossible to stand on. In Expert Mode, the dandelions travel slower to stay on screen longer, with a combination of the vines on the flying platforms growing faster.

Once Cagney enters this phase, all Toothy Terrors will disappear beside the flying orange ones, which will continue to shoot pink bullets at the player(s). Even if it creates more parry opportunities, it will be a hazard when player(s) try to jump over platforms. This will be way more apparent in Expert mode if two of the Terrors are left alive at the same time.

After taking enough damage, Cagney will be defeated, screaming to the sky and his eyes becomes black and hollow.

Transition to Phase 2 with Overgrown Roots

Transition to Phase 2 (no frame loop) 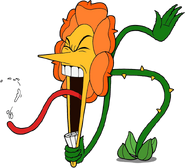 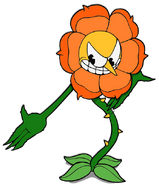 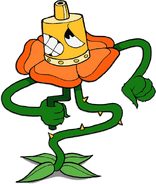 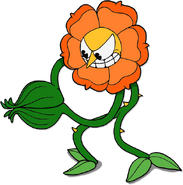 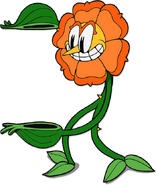 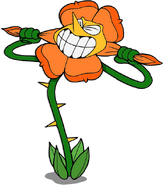 Cagney about to transform 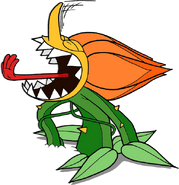 Cagney as seen in the good ending

Cagney Carnation in the Xbox One, Fan Expo Canada, and EB Games advertisement[2]

Concept art of his background.

Pencil test of Cagney (no blinking) 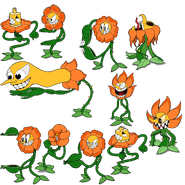 The Sprites For Cagney!

A cloud bomb attack is one of Cagney's "magic hands" attack projectile, Cagney will fire one of them each time, they aim straight at where the players are and stick to the flying platforms or the ground, having a small delay before exploding into a puff of clouds.

Pink seeds can spawn a blue flying Toothy Terror, when it shoots a bullet, it will aim at Cagney and deal 25 damage to him. It shows its eyes and shouts "OH!" when shooting. Even though the flower appears to be on the player(s)' side, they will still take damage from its hitbox or from the bullet, which is still always parryable. Hitpoints = 1