Blind Specter is the first phase of the Phantom Express in Railroad Wrath.

Blind Specter is a light blue ghost with an empty eye socket and yellow eyes in the holes of his palms.

Blind Specter appears to be trying to scare Cuphead and Mugman, as seen in the intro. He also seems to be slow at talking as seen in the death quote as well, either that or he just has a penchant for the dramatic.

Before the battle begins, Blind Specter will pop out of the back of the train to taunt the player(s).

Blind Specter attacks by banging his palms on the ground which makes eyes pop out and damage the player(s). The eyes can be destroyed. In Simple mode, he stays idle for a longer time each time he stops spawning eyes. In Expert mode, he spawns eyes for a longer time. Hitpoints = 3.5/3.5/3.5

Meanwhile, flying pumpkins will drop pink ingots on the platform edges to move it closer to Blind Specter, making it easier to be hit by him. These ingots can be parried. In Simple mode, the pumpkins never appear. Hitpoints = 4/4

After enough damage is taken, Blind Specter screams in pain and retreats inside the train. 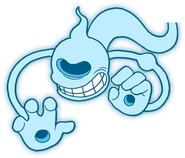 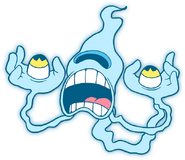 pencil test of him attacking

The Blind Specter was inspired by Pan's Labyrinth's Pale Man, and his blue ghostly form is based off the ghosts in the 1837 Disney cartoon Lonesome Ghosts.[1]

Retrieved from "https://cuphead.fandom.com/wiki/Blind_Specter?oldid=58480"
Community content is available under CC-BY-SA unless otherwise noted.