View source
watch 01:02
Who is Baroness Von Bon Bon?
Do you like this video?
Play Sound

Baroness Von Bon Bon is a character of Cuphead residing in Inkwell Isle Two, and the main boss of the Sugarland Shimmy level with her candy-based, anthropomorphic castle fortress Whippet Creampup.

She is a tall and skinny woman, donning a good deal of resemblance to a soda bottle. She has pastel pink skin of a color similar to bubble-gum, very short, maroon-red colored hair with a large curl at the bangs, similar to a lollipop, and big yellow eyes, similar to the color of lemon drops, topped off with long eye-lashes. Whenever her mouth is entirely closed, it seems to fade behind her hot-pink, heart-shaped lipstick.

As a sign of her royal status, she wears a sleeveless, reddish-pink dress with a red and white, diagonally-striped bodice (reminiscent of a candy cane), white puff sleeves (much like donuts), darker red flounces (which resemble piped icing), and light pink and white speckles on the puffy, floor-length taffeta. She also wears deep pink, elbow length, opera gloves with cuffs, a hennin hat resembling an ice-cream cone with a white feather on top, and wields a candy cane as a staff, which she uses as a shotgun. In a few frames, she also appears to be wearing pink shoes with white trims and no visible petticoat, oddly enough.

Whippet Creampup is a giant anthropomorphic strawberry flavored cake. On the sides of him he possesses two towers made out of cake, which support eyes. He also has bars on his mouth. The top of his towers is made out of whipped cream.

Baroness Von Bon Bon possesses a rather feisty attitude for her position as an authority figure. Whenever a subject of hers is defeated, she will shake her fist at Cuphead and/or Mugman in aggression. She can also be crazy and desperate, which is shown in the transition for the final phase, ordering her castle to charge so she can make a last attempt to destroy the brothers. In spite of her ferocity, Bon Bon appears to be somewhat dramatic, crying as soon as she is defeated. The good ending though hints that despite her earlier hostility, she's actually more of a sweet, gentle, loving person.

Whippet Creampup seems to have a childish and temperamental personality, as shown when she is pounding her fists on the ground when his mistress is defeated. She also seems to be territorial and ill-tempered by nature, as shown when the Baroness pulls on his towers to get his attention. She is also shown to be subservient to the Baroness as shown by her nonverbal cue to give chase to Cuphead and Mugman in the final phase.

Baroness Von Bon Bon makes the "Off with his/her head!" gesture with her head detaching from her neck for seconds and spinning before getting reattached, as she gets grabbed by her own candy cane into the mouth/entrance of her castle, Whippet Creampup.

The first three phases of the Baroness fight is unique from other boss fights, as the majority of them is focused more to the Baroness' subjects fighting the brothers on her behalf before the actual fight against her begins. A random three of these subjects will appear during the fight:

Lord Gob Packer flies towards wherever the player(s) are heading. He also has a minion that follows him, whom cannot be killed until Lord Gob packer is defeated. And the current position of player will soon get deadly. In Simple mode, there are no minions following him. In Expert mode, there will be two.

Once defeated, Lord Gob Packer will crack into pieces. He cracks layer by layer, until what is left is a tiny jawbreaker resembling the minion(s) that follows him, which has cross eyes and a halo on top and floats upwards.

Kernel Von Pop flies around the arena in a horizontal figure 8, randomly choosing to go straight ahead or travel vertically in the middle, and summons smaller and inverted clones of himself that fly upwards. In Simple mode, the smaller versions of himself won't be summoned. In Expert mode, they are summoned at a faster rate. Hitpoints = 10/10

Muffsky Chernikov jumps around the arena and tries to squash the players as he lands. If that fails, two frosting shock waves from his landing will damage the player(s) when they spread outward three times. In Expert mode, instead of waiting for the shock waves to dissipate, he will jump before they are gone, when the third splash appears specifically. Muffsky doesn't appear in Simple mode.

Sargent Gumbo Gumbull runs around the arena and shoots gumballs up in the air as they rain down on the players. In Simple mode, he scrambles across the entire arena but won't fire gumballs. In Expert mode, the gumballs rain down faster. He has the most health out of all the baroness’s minions.

Sir Waffington III flies around the arena. He will split into 9 pieces in a spread attack and reverts back to his original form, hurting the player(s). In Simple mode, he doesn't do anything besides fly around. In Expert mode, he will only shoot either in the four cardinal directions at first, and then fire the diagonals, or vice versa. When defeated, Sir Waffington III will once again disassemble, but this time, it doesn't hurt you. Hitpoints = 250/250/305

After each subject is defeated (except for the third one), the Baroness will appear from the gate of Whippet Creampup and shake her fist in anger at the player(s).

When the third subject is deployed, the Baroness herself, bearing a sickening grin, will appear on top of Creampup wielding her candy cane like a shotgun and shoot three cotton candy puffs at the players' current location that circle around each other with one of them being able to be parried. In Simple mode, she will not appear to shoot at this phase (though she will in the final phase). Hitpoints = 3/3/3 In these phases, although he’s one of the baroness’s minions, touching Whippet Creampup will not hurt the players.

Throughout the entire battle, there will be a moving platform resembling a piece of candy which players can stand on.

As soon as the third subject is defeated, the main battle with the Baroness herself begins. Bon Bon appears at the top of Creampup, grinning maliciously, and she yanks on the castle's turrets, causing it to grow monstrous, with it's eyes becoming yellow and menacingly cat-like, the bars at the gate/mouth forming into teeth, a pair of arms growing out the sides. Bon Bon then orders it to give chase, and the battle commences.

In this phase, Bon Bon will throw her own head, which homes in on the player(s) as they are moving, and a head will appear in the original place. Creampup spits out rolling Patsy Menthols at the player(s) in order to flatten them. Although cannot be defeated with hits, Patsy can be parried to gain extra height, though parrying her doesn't fill the super meter as much as normally. In Expert mode, two heads can be thrown at maximum. Patsy also rolls faster and spawns more rapidly.

Unlike in the previous phases, the players will get hurt if they touch Whippet Creampup in this phase. The platform from previous phases stays in place when the Baroness battle begins, which can help the player(s) to gain enough ground to shoot at the Baroness and avoid her and Creampup's attack.

After taking enough damage, the Baroness is defeated as she and Whippet Creampup are seen crying with the latter slamming its fists onto the ground. In Simple mode, Bon Bon will appear to fire the candy cane shotgun endlessly without commanding Whippet Creampup to move, and the Jelly Bullies Squad will still be sent out. Also, in their simple KO, Bon Bon still cries like she does in regular or expert, but this time, instead of pounding his fists on the ground, Whippet Creampup will just sit still with a disappointed look in his eyes. 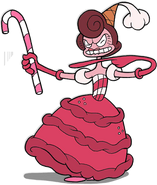 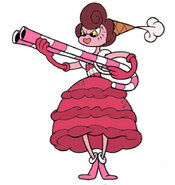 Bon Bon chasing after the player(s) 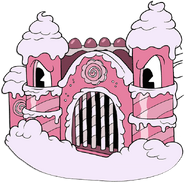 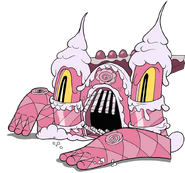 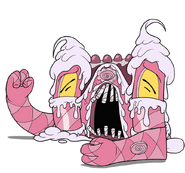 Pencil test of the Baroness' intro 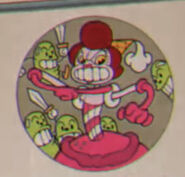 Baroness Von Bon Bon as seen in the good ending

Concept art of her attack