All Bets Are Off! is the penultimate level in Cuphead, and the first level in Inkwell Hell. Here, King Dice and his minions can be fought. Once you beat this level, you'll unlock the final stage in Cuphead, One Hell Of A Time.

The music for King Dice's lobby area is the Die House's song without the lyrics. The mini bosses also have their own music, though it is just a reprise of the introduction music, without the piano solos (There are 3 mixes in total, one featuring trombone solos, one featuring alto saxophone solos, and one featuring trumpet solos), whereas the music for the fight against King Dice Himself consists of long winded drum solos and fast paced beats reminiscent of Die House. The main fight's music, along with the drum solo from the board section, and a hybrid of the mini-boss music, is rolled into one track in the original OST, fittingly entitled "The King's Court".

The location of All Bets Are Off! is in the main entrance of the casino in Inkwell Hell.

During this stage, King Dice will clap out a parryable die from his hands. You'll need to parry this die in order to move on in the board game.

The board game consists of fifteen spaces:

The board game consists of you battling 3 to 9 mini-bosses. The bosses are a group of beverages, a stack of poker chips, a giant cigar, a living domino, a rabbit magician, a skeleton horse, a roulette themed ballerina, an 8 ball and a monkey toy. Each of them represent something normally found in casinos. 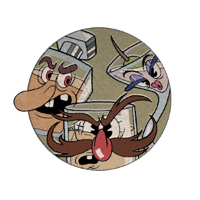 When you land on Space 1, you'll have to fight the Tipsy Troop. The Tipsy Troop consists of three members, a rum glass, a martini glass, and a whisky bottle. Each of these members have their own attacks. Also, they are considered separate enemies and must be defeated one by one. This is the only mini boss without an introductory animation. They simply just do their idle animations at the start.

Once you defeat all three members of the Tipsy Troop, the fight will be over and you'll move on to the board game. 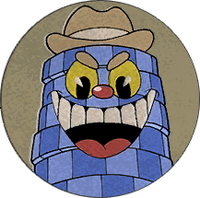 "Hey, short stack! This ain't a place you wanna be hanging 'round."
—Chips Bettigan, Death screen

When you land on Space 2, you'll have to fight Chips Bettigan. Before the fight begins, King Dice will be shown putting Chips together.

Chips Bettigan has only one attack, and that is to divide his poker chips then go to the other side of the screen. The poker chips are usually divided into two or three groups, and they'll come at different times. In order to dodge the poker chips, all you got to do is either jump or duck. Though if you have the Smoke Bomb Charm, you can easily dash through Chips' chips.

In order to hurt Chips, you must shoot his head (the blue poker chips.). Shooting any other part of his body won't hurt him. It is highly recommended not to try to attack Chips while he's attacking you, since this makes it harder to dodge his poker chips, unless you have the Chaser equipped, as equipping any other weapon while he attacks can result in you missing.

Once enough damage is dealt, Chips will fall down, losing his yellow and red poker chips, while his hat falls down slowly with crossed eyes and his tongue sticking out. You can take it as a sign that the fight is over. You will then go back to the board game after this. 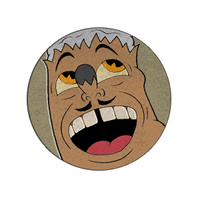 "Looks like you could use some fresh air."
—Mr. Wheezy, Death screen

When you land on Space 3, you'll have to fight Mr. Wheezy. Before the fight begins, King Dice will light Mr. Wheezy with a lighter.

In this fight, the player(s) and Mr. Wheezy are on two ashtrays. From time to time, Mr. Wheezy will turn himself into ashes and switch ashtrays. Cuphead and Mugman must jump over to the next ashtray when this happens.

But be careful, since there are cigarette bats that'll fly around the middle of the screen. These cigarette bats can't be disposed of, so you must dodge them. It is recommended to use the Smoke Bomb Charm, since you can easily dash through the cigarette bats without getting hurt.

From time to time, Mr. Wheezy will shoot yellow projectiles at the player(s) in a loop de loop-like pattern. You can dodge these projectiles by either going under them or jumping over them. These projectiles can't be disposed of, so the only thing you can do is dodge them.

In expert mode, Mr. Wheezy will shoot them 2 times faster and can either choose to shoot it upwards, or downwards, making it harder to dodge and disallowing the player to simply jump and dodge them. The player will now have to move horizontally.

Once you defeat Mr. Wheezy, King Dice will squish Mr. Wheezy with his foot while coughing aggressively. Take this as a sign that the fight is over. You will go back to the board after. 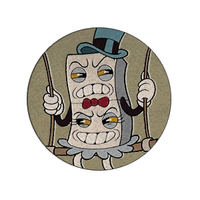 "You set them up, I'll knock them down."
—Pip and Dot, Death screen

When you land on Space 4, you'll have to fight Pip and Dot. Before the battle begins, Dot will look at Pip, (seemingly flirting or something) while Pip will lift his hat, seemingly greeting Dot or Cuphead.

During this fight, dominoes on the floor will move left towards a spiked domino wall. On some of the floor dominoes, there will be spikes that the player(s) have to jump or dash over. It is recommended to stay in the middle of the arena, and always walk to the right, but avoiding touching Pip and Dot.

All the while, Pip and Dot will be on a swing, slowly going up and down, so the player(s) must aim at them. Pip and Dot have two attacks in this fight:

Once enough damage is dealt, Dot will be mad at Pip, and will proceed to kick him in the eyes, presumably because she thought their loss was his fault. Dot doing this means the fight is over. You may proceed back to the board game. 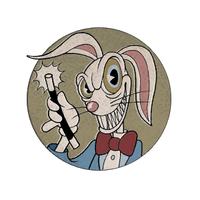 When you land on Space 5, you'll have to fight Hopus Pocus. Before the battle begins, Dice will pull him out from the hat and the fight can begin, referencing the famous "Rabbit in a hat" trick.

The key element in defeating Hopus Pocus is to memorize his attacks.

Once enough damage is dealt, Hopus Pocus will then be strangled by his own bow tie. This means the fight is over. You can return to the board game. 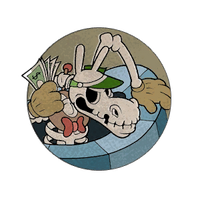 "This derby is over and thee results are in. Last place...YOU!"
—Phear Lap, Death screen

When you land on Space 6, you'll have to fight Phear Lap. Before the battle begins, Phear Lap will jump in his plane and the battle can start.

The key element in defeating Phear Lap is good reflexes and keeping an eye on the derby grounds.

When enough damage is dealt, Phear Lap will cry out money and hold dollar bills in his hands. The battle will be over after this. You can return to the board game after this. 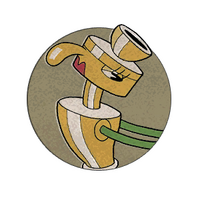 When you land on Space 7, you'll have to fight Pirouletta. Before the battle begins, she will get into her dancing position.

Precision is key in the battle. The Smoke Bomb charm is very useful in this battle if equipped.

When enough damage is dealt, Pirouletta will bob her head up and down in shame. The battle will end after this. You can return to the board game safely. 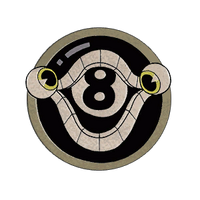 "Fault, scratch and choke -- are you trying to hustle me?"
—Mangosteen, Death Screen

When you land on Space 8, you'll have to fight Mangosteen. Before the battle begins, a big 8 Ball will be hovering, only for a mouth and two eyes to appear.

Precision and memory is key.

When enough damage is dealt, Mangosteen will vomit a black liquid, and any remaining billard chalks will fly off the screen. This means the fight is over. You can return to the board game. 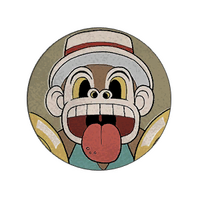 When you land on Space 9, you'll have to fight Mr. Chimes. Before the battle, the cards will reveal their pictures before flipping from view. Mr. Chimes will stick his tongue out, in a form of taunting.

When enough damage is dealt, Mr. Chimes will repeatedly slam his cymbals in his head, probably because he was blaming himself for his loss. This means the fight is over. You can return to the board game safely. 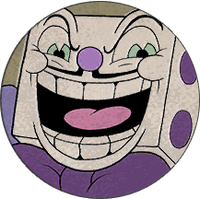 "So clever, so dapper, ya betta' believe this dice is loaded. Hi-de-ho!"
—King Dice, Death screen

After you land on the "FIN" space, the battle with King Dice commences. He has one attack. Precision and instinct is key.

There are two ways you can avoid damage.

King Dice always switches hands when in battle (Left to Right, Right to Left), but keep in mind that if you choose to hide behind King Dice's hands, there is a real possibility that he won't switch hands on one occasion. This is the instinct in the battle, since you don't know which hand he'll use next.

Once you dealt enough damage, King Dice's fight will end for good. His head and tuxedo is damaged, lets out a groan and his hands will be begging for mercy. You have just defeated the Devil's right hand man, and may proceed to the final boss.

Different mixes of "The King's Court" play during the minibosses' fights, the mix that plays in-game is completely random.

King Dice's parryable Die
Add a photo to this gallery
Retrieved from "https://cuphead.fandom.com/wiki/All_Bets_Are_Off!?oldid=60092"
Community content is available under CC-BY-SA unless otherwise noted.